HOW TO: Program the native SpeechRecognizer for Continuous Dictation and to do things

The SpeechRecognizer tutorial example is Speech Recognizer Parrot. Use voice commands to do different things; command something to happen, use it as a typewriter. amaze your children etc. Parrot can provide continuous recognition (more or less) or not depending on how you use it and how you talk to it. It is just like (almost) talking to a Parrot. Say something and Parrot repeats it. Make Alexa? No,it is not that amazing. The Parrot can do some things that Alexa can do despite utilizing much simpler technology. The code uses no extensions, just the native SpeechRecognizer and a TextToSpeech component. 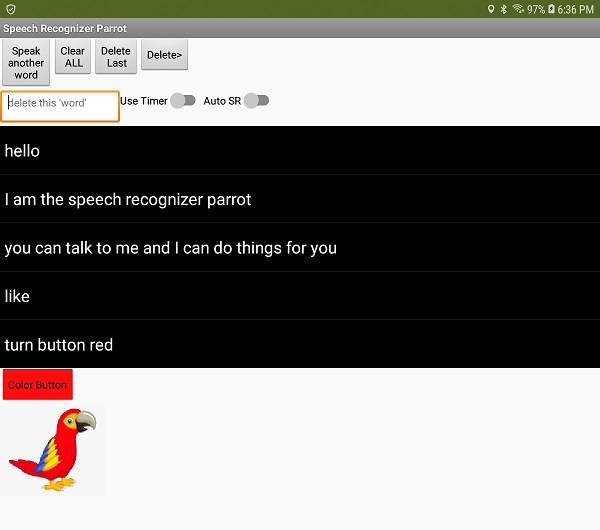 How to Use it

What it can do

How to avoid mistakes

Improve this simple app
Parrot is not a complete app; it shows some techniques. Its certainly is not Alexa (which is incredibly complicated software and only available by subscription). Parrot records what is said to it in a List (which is copied to a ListView).

The Parrot example is not perfect. This small app demonstrates what can be accomplished with the native SpeechRecognizer control. The app screen is configured to run on a tablet. If you run Parrot on a phone, you may have to change the placement of controls. Its ability to recognize what you say depends on the hardware and operating system it is run on. This app tested well on a Samsung A10 Android 8.1 tablet, performance was less enlightening on an Android 4.2.2. Your performance in your usage most certainly will be different and hopefully similar.

This is an advanced tutorial. That means everything (well, most things) is not explained. It takes three to for times the development time to document everything.

Can something similar be coded with other tools?

I hope this helps you to code the native SpeechRecognizer tool to do what you want it to do.