How to: Roll Six 🎲 and Share the Roll using a CloudDB

Do you play board games or just like dice? One app can roll six dice or one die at a time. The other uses a CloudDB to share your 'roll' with others.

Roll Six is a dice rolling 'engine' using only Blocks. The code is usable stand alone or as a part of your own game.

The dice 'rolling' code and display is simplified in part by using appropriate 'names' for each die face. The app uses two sets of dice, one white, one red. The white dice set die images are named for the number of pips on the dice face; 1.png, 2.png etc. The red set is similar; 1.jpg, 2.png etc. The naming the dice images using their pip counts as the name simplified the logic to call a particular die to display.

The app can "count" the total dice pips and display the number and/or the app can "announce" the dice roll result using TextToSpeech. 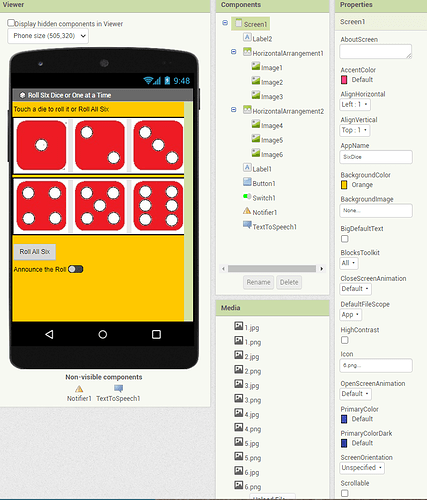 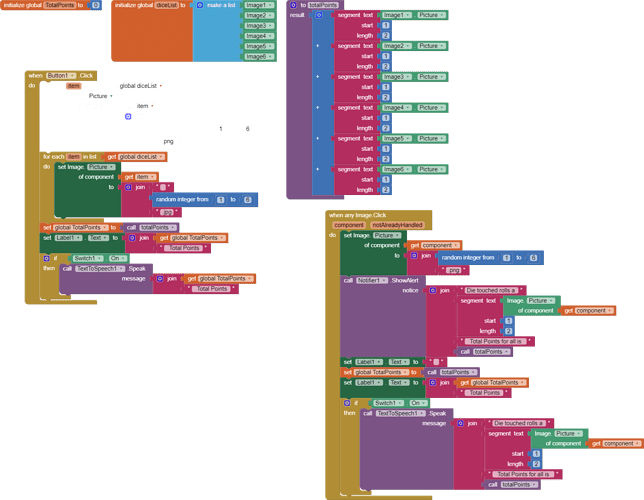 Touch one of the six die images to 'roll' that die and display the result of the roll in a notification. It also updates the total pips count for all six dice.

The Roll All Six dice Button gives the result of the roll of all six dice.

Enhancements for you to code:

Share the Roll is an adaptation of RollSix to roll two dice and share the results. The app shares the results of the dice roll with others that have the app.

A minimum of two Android devices are needed to fully test the app. Install the app on two devices or store it on one device and use it with Companion in live development mode on the other device.

What is rolled on any device is mirrored on all the other devices using the white dice set. 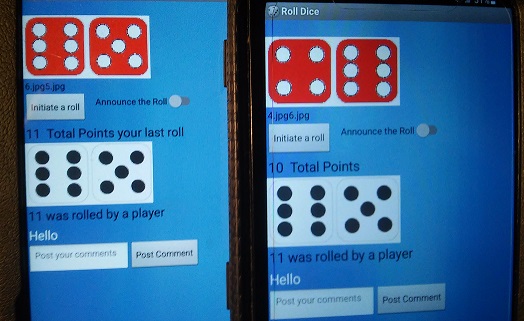 How To Use
When the app is open on two or more devices, users share the images and total number of pips of the dice roll in real time. When one user touches the Initiate a roll Button, all users see the results in near real time.

If the Announce the Roll is turned on; the app uses TextToSpeech to announce the roll's results (total pips count of the two dice).

A participant can send everyone a message using the Post comment Button if they type a message in the TextBox.

The results of the most recent dice roll initiated by any user in the 'network' of users is saved in the global variable currentDiceRolled.

All dice images are contained in the app. No images are stored in the CloudDB however the image could be. CloudDB allows direct storage of small images.

Presently two CloudDB tags are used; one Tag to store the dice information (diceRoll); the other stores the most recent comment made by any one user (text). 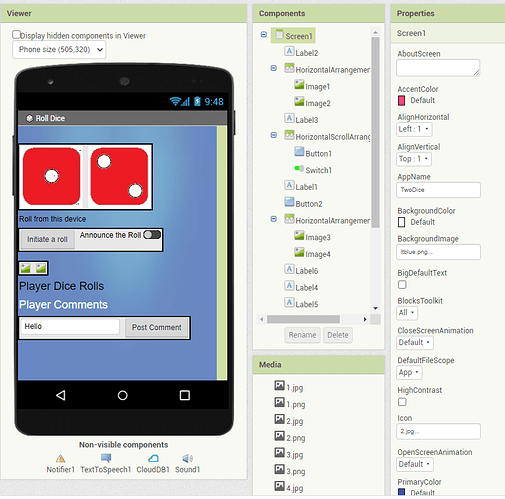 For you to do

The app was tested on Android 4.2 and 11 cell phones and an Android 8.1 tablet. Will it run in the present emulator? I do not know.

I hope you find these two code examples useful.