Alarm Manager Extension to send a notification or autostart the app at a given time or at boot time only once or repeated by interval (15 minutes, half hour, hour, half day, day and week, month and year). After clicking the notification your app will be started. You can define a start text, which will be passed to your app in method 'get plain start text' and trigger some action after your app is started. You also can define several alarms, just use a different id for each alarm. Also of course works if your app is not running.

New in version 2: The defined alarms are not lost anymore and will now be automatically reinitialized after rebooting the device.

New in version 3: new features repeat weekly, monthly, yearly added. AfterAlarm event added. Bugfix updating or cancelling an alarm. Now after an alarm (interval type ONCE) has been triggered it will be removed from database. Thank you Per por being the sponsor of version 3!

New in version 5: Autostart property added including the methods HasAppearOnTopPermission and OpenAppearOnTopSettings. You now can choose if you want the extension to show a notification or autostart the app at the given time.

New in Version 6: new method startAtBoot to start an alarm at boot time (i.e. display a notification or autostart the app)

The extension can be used for devices starting from Android 5 (API 21).

Tested successfully on several devices starting from Android 5 up to Android 12. Thank you @Anke and @Peter for your tests. 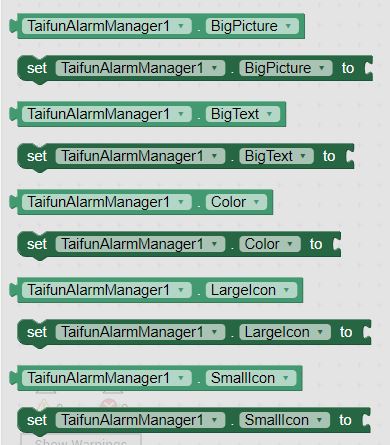 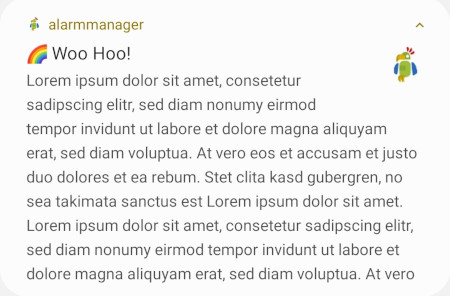 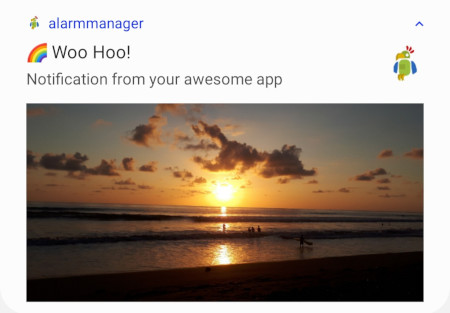 This extension now also works in Kodular, however unfortunately they introduced a new bug... the block get plain start text can't be used currently, see also this Kodular error report...

12 Likes
Reminders with Alarm or Notification
How do I go about making a timer/notification event fire from a user-selected time?
Background Tasks extension [3.8 A] by KUMARASWAMY_B.G
FAQ Section: Background Services
FAQ Section: Background Services
How can i send and save data to online server then receive it on other device?
Action while app is closed
Is there a onesignal type component that works in the background?
Temporary start my app in background?
Background Tasks extension [3.8 A] 🥳
[FREE] Notification Style: extension with various types of notification
Clock stops when lockscreen, ActivityStarter workaround with com.android.deskclock
What the error code means: Bad arguments to
MIT timer 1 year
Create An Alarm
Open app at phone start
How do I send a notifcation at certain time?
Can I use MIT App Inventor in creating my app?
E-mail or push notification help/suggestion
New App Help: scheduled + sticky notifications
Why alarm not working
Reminders with Alarm or Notification
How can I make a daily rutine application?
Create a notification in MIT App Inventor
Mp3Tags extension
Create a future alarm o alert
Techno_Vedang November 1, 2020, 5:10pm #2

Also of course works if your app is not running

Amazing...
Alarm Manager is one of those APIs which can be used to run our apps in background.

all alarms are lost after the device

If you are open to suggestion then:

First problem: on an Android 5 device I get an error (End Application):
This date format works: MM/dd/yyyy 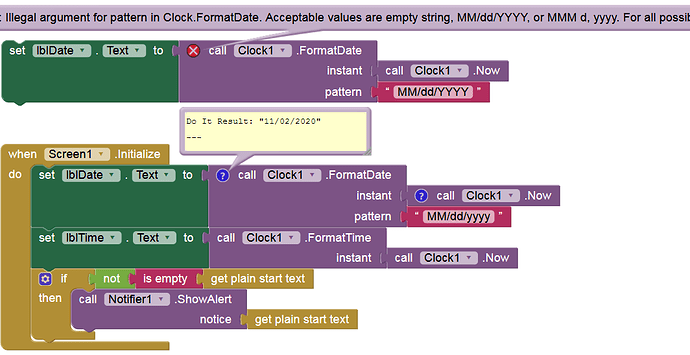 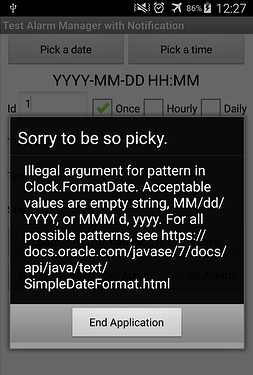 But even when I changed that, I get a Runtime Error, after clicking on Start. 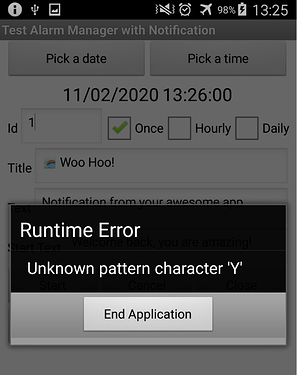 I unlist this thread meanwhile we are doing some more tests...

@Anke please first test using the newer devices, i.e. Android 11, 10, 9 and 8
also from your feedback I can't see, what exactly you are testing... it seems to be, yo are testing the FormatDate block?
if you like to start an alarm only once, you have to pass an instant as input parameter for the datetime 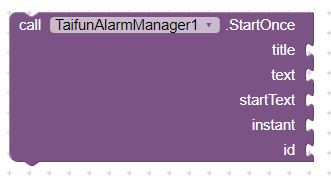 I tested the alarmmanager2.apk on some of my test devices.

Does not work on:

I tested it on my Pixel 4a (Android 11) and your alarmmanager is working and showing the notification.

That error with date format YYYY vs yyyy looks to be a can of worms, from what I see about week years in

So just format it like this: → MM/dd/yyyy, then there shouldn't be any problems with any Android version.

New in version 2:
Bugfixes, new methods and most importantly after rebooting the device the defined alarms will now automatically be reinitialized

Thank you Per por being the sponsor of version 3!

I'll buy it if it runs in the background

if it runs in the background

without that it would be useless...

Also of course works if your app is not running .

I tried the version 4 of the alarm with the "alarm manager example app", but it did not send notification until I fully closed the app. I tried on different devices and made sure the Android version is up to 5, but it still did not work.

Do you see the "ALARM !!!" notifier, if the app is in the foreground or in background (but not closed)?

Note: You also get the message "Welcome back, you are amazing" at the bottom of the screen.