Go Scroll Yourself! blocks only (No extensions, No JavaScript)

This tutorial is intended for people who need to display a heavily customized scrollable window into a large table. It can also be used as a CardView.
(I needed a pithy title, and "The Elder Scrolls" was taken.)

My sample subject area for my data is the historical or current set of legislators in the US Congress, both Representatives and Senators, with photos (where available.)

Credits for the source data:

I have embedded my two source CSV tables in the assets of my .aia file for load at startup, but the photos are loaded dynamically from the congressional bioguide site when the app user stops scrolling, to reduce the chances of the app acting like Denial Of Service attack.

The columns for my sample data files are the same, only the time spans differ. 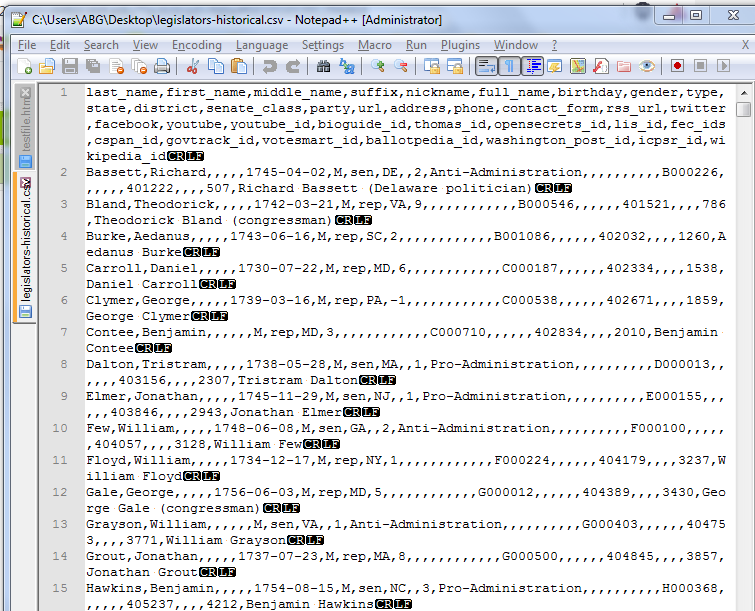 This sample is all about the scrolling.

Things I did not bother with for this sample: 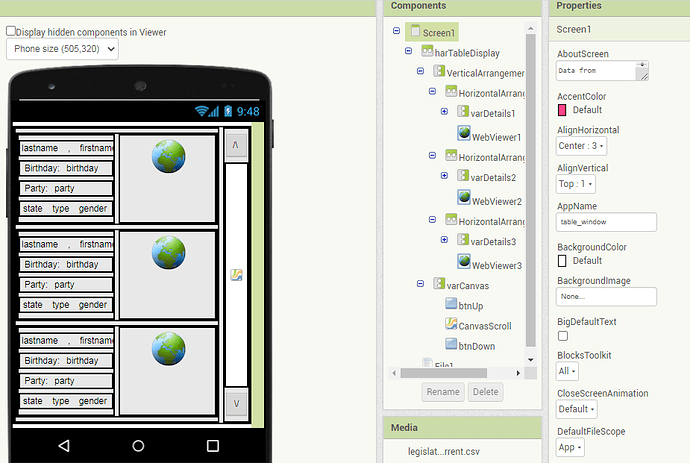 From outside in, the table view consists of

The table row details are Designer copies (Ctrl-C, Ctrl-V) of the first table row detail Arrangement, which was the finickiest part of the app, trying to squeeze in data from 7 columns of the CSV file:

Designer Single Row components212×502 18.6 KB
Note how I renamed the important Labels to reflect their contents, with a terminal '1' for AI2 autonumbering when I copied and pasted the enclosing HorizontalArrangement1 inside the Vertical Arrangement varDetails.

Once I have a well named collection of display components, it's time to collect them in the Blocks Editor to support iteration over the display:

initialize global label_table to2640×222 75.7 KB
Notice how the three rows of components appear in the same order as they are displayed, to keep things simple. The actual input order of the corresponding CSV table columns is in

For debugging, I copied the incoming file to a global variable before doing CSV to Table conversion.

The scrolling relies on a global variable

, initially 0, intended to hold how far down we have scrolled, measured in row count.

At startup, all three parts of the table display need to be loaded: 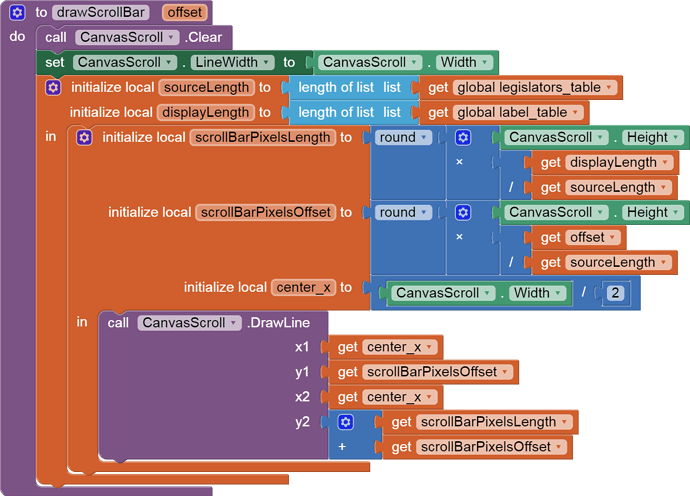 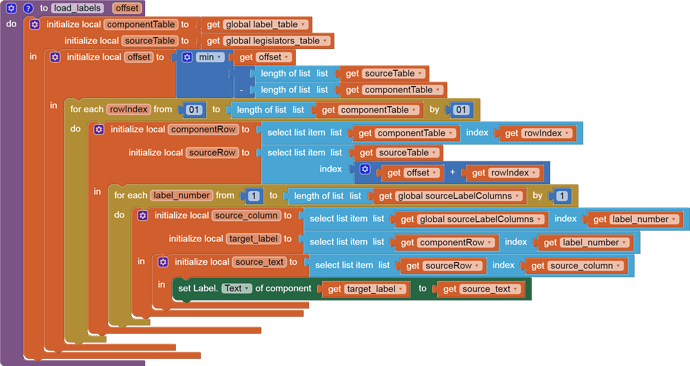 to load_labels offset do2196×1168 390 KB
I hardwired the source and target tables here. Feel free to parameterize them as needed.

To avoid running off the end of either table when looping through the indices of the target table, I limit a local copy of the offset using the minimum function.
That lets me fill the entire Label table. (This might need further work if you start to filter the source table so far that its length is less than the length of the Label table.)

Once I have lined up a row of Labels and a row of data from the source data table, it is time to fill in the Labels of that row from that data row. This is where the list of source column numbers is needed:

initialize global sourceLabelColumns to1276×52 15.6 KB
That list maps the seven Labels into the corresponding input table column numbers, to allow the Labels to filled in a loop. 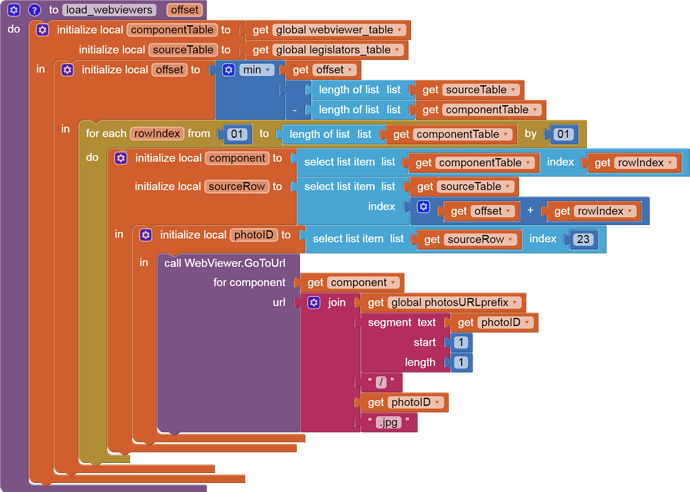 The outer layers of this procedure were copied from the load_labels procedure, since the same logic applies to lining up source rows and target components.

The bioguide web site keeps 26 alphabetical subdirectories of photos based on the first letter of the last name, hence the extra work building a URL to scrape the photo.

The Up and Down buttons:

The Up Button has to watch out that it doesn't run off the top (item 1) of the source table.

The Down Button has to watch out for the ends (length of list) of both the source (legislators) table and target (Labels) table.

The y value of the Canvas touch point needs to be mapped into a new offset into the source (legislators) table.

To avoid overloading the Congressional photos site, we don't bother trying to load photos during a drag.

Eventually we have to remove our finger from the scroll canvas. That's a good time to complete our web scrape.

I have not shown

@TimAI2 has some nice code in a private exchange in this thread where he uses a ListView's MainText to hold a text JOIN of individual row items, interspersed with '\n' and other formatting.

I hope he will make it public for us.

I also invite other ideas for table display techniques to this thread.

I hope he will make it public for us.

As requested, here is my take on creating a similar display to that generated above by @ABG, just using the ListView component. Needs much more work to do all the things that @ABG 's does. I reduced the data in the csv file offline, and only used one image (it was late...)

You can use the list view to return image, main text or detail text on click if you so wish 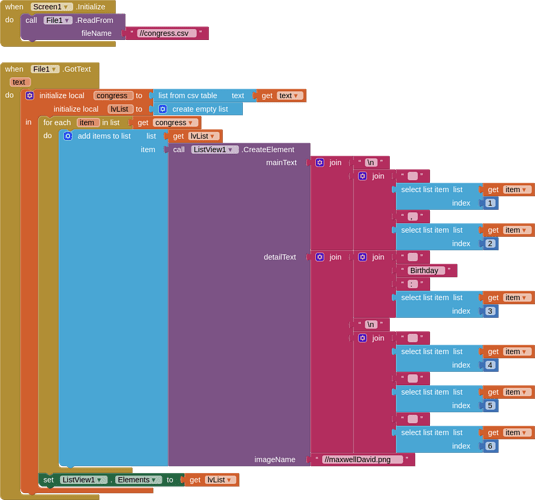 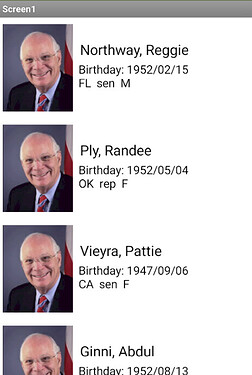 You may notice I put two spaces at the beginning of each line (there is no padding/margin between the image and the text ...Susan...)

great guide never thought of ddos via webviewer would be like this easy , but it's good way to drain bandwidth of limited hosting servers

It's not a good idea to rely on internet based images because websites are often changed, making the URL for the images void. It also forces the App to only work properly online.

These are all valid points.

My personal attention span is at the gumball machine level.

If any one has solutions for the other use cases, please feel free to post or link to them here.