Wondering if you could help. Been awhile since I have been on the site. Wrote a couple of simple apps back then for a couple of Bluetooth applications. It's my first time using "File". Trying to create a programable timer using comma delimited user inputted data, Save and Get on an Android 9. using Internal storage. The data is being stored like this: I entered "11, 22, 33, 44" and it saved like this ",1122,33,44," . Any idea what I am doing wrong? 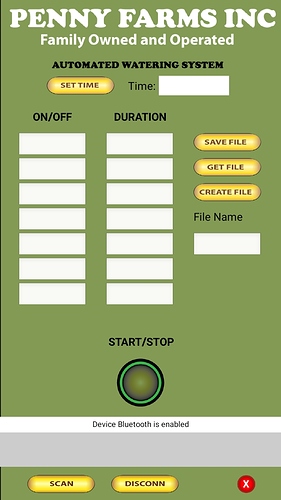 Thanks for the help

Your description and blocks don't say much about the problem. Try to explain in more detail what the problem is. Maybe you can use TinyDb instead of a file?

Before you ask a question / open a new topic please take care of the following points: The forum was previously searched for similar topics / issues. Give a precise (detailed) description of the issue / bug, the goal. Show the (relevant) blocks (images, screenshots of blocks in high quality). Debug your blocks (connect to Companion and right mouse click: → Do it). Name the Android version running on your (test) device. Do not open multiple threads on the same topic. to 3: get an image of …

Thank you for the quick response Patryk. Here goes.

I am trying to create a cellphone operated timer using bluetooth to control a water pump. The Bluetooth app will control the AC motor using a DSD 2 Channel relay board. The communications portion to the relay part of the app I have already completed. The Start/Stop button accomplishes the interface for that.

I have limited knowledge with respect to file programming using phone app software. The last time I had to deal with them is back in the Visual Basic 5 days almost a half a century ago.

The other part of this app involves when to start the cycling. The user will be able to specify the time in a 24 hour period at which to start the watering cycle. I thought I would use the Timepicker component for that.

The screen image I sent previously is what my screen will look like. And the programing block I sent is as far as I have gotten. The issue I described previously is why I have contacted you for assistance. It's obvious I have no Idea what I am doing! I have never used TinyDB or File before. I want to keep the files on the phone if possible.I am using a Galaxy J3 Achieve with version 9 software. Also I am using the MIT AI2 Companion interface to debug the code. I hope this gives you enough info.

Thank you for your help.

I noticed that you are adding each data separately to the file. You would have to first form all data for writing, separating them, for example, with commas, and then save them once, overwriting the previous data. In your case, it is better to use the save file command than append to file.

TinyDB is perfect for saving named data in a phone with no fuss and no worries about marshalling it into proper formats for file storage.
Samples:

@jwilliams10026 I would totally use the TinyDb rather than the file in this case, makes things wayyyyyyyyyyyyyyyyyyyyyyyyyyyyyyyy less complicated, as @ABG has said. Also, your UI is so slick... how long did it take you to make and plan out? Nice work.

I've been working on the app for 2 days so far. I've done a couple Bluetooth apps before so I just borrowed that code. new graphics was nothing. The watering system itself took almost a month. Osmosis system, 2-50 Gal tanks for watering, 5 tents, Separate fertilizer tank, 100-6" watering rings, manifolds, pump, bladder, valves, plumbing . . . . .you get the picture.This is actually part of a bigger project. A totally automated grow system for my sister who is a grower. Waters, fertilizes, measures Ph, humidity, light, temperature, flushes her grow. Eventually I will set it up using Wifi. The basic system does 100 plants with expandability up to 1000.

Here is an earlier view of part of the system. 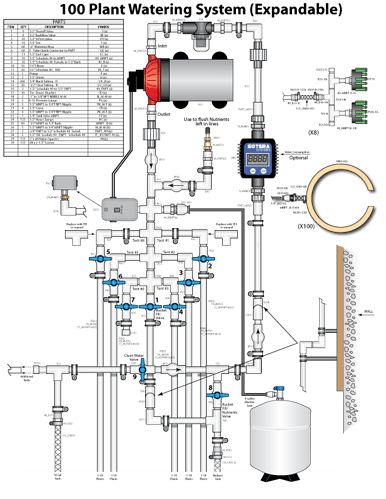 I have placed control valves in parallel with all the shut-off valves to automate.

I have no experience with TinyDB is the "tag" the same as "file name"?, Also, are you saying I need to combine all the data into one string using comma delimiting before saving to file? If thats the case I should probably create an array for the information right. Can I do that with text box components? I need an index number or something right? or is there another way to do it?

In tinyDb, you save the data under a tag. Tag is any string, equivalent to a file name in component file. You can use text blocks such as "join" to format the data.
See an example:

Data from text field1 is connected with a comma with data from text field 2. Then the data created in this way is saved to TinyDb under the tag "name tag". You can also create a separate tag for each text box.

To read both data from TinyDb and enter them into text boxes, you create blocks like this:

First, we create a data list by dividing the recorded data at the comma. Then we add data with the appropriate index from the created list to the text field.
Of course, this is just an example. There are many ways to write and read.

@jwilliams10026 The tag is basically the namespace of what you want to store. It is how the system finds things. Like putting 100 under Coins. You can store multiple things as a list of data, like a list containing the water amount in the tank, and the fertilizer amount in the other tank (tag=Tanks), and under another tag a list of the nutrient %'s (tag= nutrients), or you can store items as separate things. You can also use / to make subcategories, like this ↓

How do I create a list of tags in firebase?

As for storing things, you should add tags that separate them. Like storing User1's stat's under /User1/stats or /stats/User1. This way you can have different storage spaces per user per thing you want to store. like this↓

Edit: Using / to make subcategories only works with FB (Firebase). It will create a flat string otherwise in the tinydb.

Here is an earlier view of part of the system.

Off-topic- You must be pretty good at plumbing to attempt a project like that. Props for making it this far!

I am starting to understand pretty simple. How do I get the 3 node in the "join" component?

You will find it in pink text blocks.
Here are the descriptions of the "text" blocks:
http://ai2.appinventor.mit.edu/reference/blocks/text.html

I thought so but my version of MIT App Inventor only has the 2 node "join".

Cool! I didn't know you could do that. See you can teach an old dog new tricks!

So should I just keep adding nodes for all 14 settings and make it one big record with ","s between to make it easier to parse when I place the info back into the text boxes when I get the info back out?

Thanks my dad taught me back in the 50's! yep still old!

You can combine all 14 data and create one tag. You can also create 7 tags, in one tag store "on / off" and "duration" from one line. Or you can use two tags, one holds all on / off data, the other all duration. Full freedom.