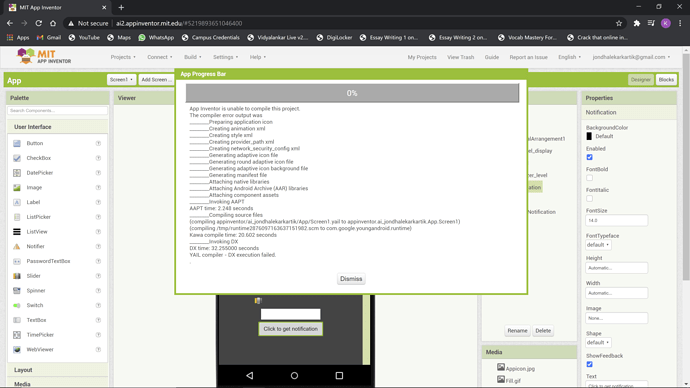 Why not show us the error ?

your error message is DX execution failed @Boban would say, "you have too much of something"... here is @SteveJG’s monster list of things to check https://groups.google.com/d/msg/mitappinventortest/fLiMEfPh09Q/1Ia0AaQEXogJ each point on the monster list might be the issue, why someone gets a DX execution failed error… that thread is a collection of several possibilities, which have been collected by @SteveJG during the years while answering questions like that… hope that helps… Taifun PS:…

the link provided is not opening

True...
perhaps @SteveJG can provide a working link to the topic ?

Certainly the link is not working. The original was posted in about 2014 so this might be a Google issue.

Try this https://groups.google.com/g/mitappinventortest/c/fLiMEfPh09Q/m/1Ia0AaQEXogJ . I am not sure this is the same version. Why Taifun's link to the old forum post Monster List list disappeared, I have no idea.

The tips and tricks are mostly in these resources, they help developers to use the AI2 tools A very good way to learn App Inventor is to read the free Inventor's Manual here in the AI2 free online eBook http://www.appinventor.org/book2 ... the links are at the bottom of the Web page. The book 'teaches' users how to program with AI2 blocks.

How to do a lot of basic things with App Inventor are described here: http://www.appinventor.org/content/howDoYou/eventHandling .

Most frustration occurs when developers violate one of AI's basic rules which include:

left corner of the window for the yellow and red triangle icons. If the red icon has a value larger than 0,

you have a serious coding error. Find the block in your code that has a red triangle and

fix it. Red triangles always inhibit creating an apk or running a project in the

however, sometimes, these need to be fixed because they trip an internal warning and not filling puzzle piece sockets that are left un-filled can sometimes cause issues if the app needs a value that is not filled.

If the connection times out, that is a problem! The aiStarter program uses the "adb" program (in the "commands-for-AppInventor" folder) to setup "tcp port forwarding" from the PC to the emulator on port 8001. This command could be failing for you. Make sure you don't have security software that is blocking the action of the "adb" command.

Some users try to use their phones BOTH with USB and WIFI. That can be done. To use the live development USB option the developer must have the USB debugging box checked. If developer later wants to use WIFI the USB debugging box should NOT be checked. If you switch from USB and then to WIFI, you may have to close and restart your browser to release cache items that tell App Inventor your are connected to USB or WIFI when that is not the case.

A second type of parse error may occur while attempting to update the emulator: When I got the "parse error" message in the emulator, I fixed it by..

Clear your browser's cache. Close the browser, then load it again. Try to build again. Sometimes switching from Chrome to Firefox or Safari or the reverse performs a miracle and corrects an issue related to the browser cache. Microsoft's Edge might seem to work for you, however our experience is it sometimes fails while the recommended browsers do not.

faultData = java.lang.IndexOutOfBoundsException or something similar. . Did you previously compile your Project using Thunkable or another third part App Inventor clone and now you are attempting to compile of MIT App Inventor? MIT has seen Projects modified using Thunkable, and so some of the property settings on the screen fale to load because they are not valid in App Inventor . The message is simple, if you choose an App Inventor flavor to start your Project, stay with it. Mixing the coding is like making a cake using apples and oranges and sauerkraut. It probably is not going to work as expected. Once upon a time a developer might have been able to get away with using the various clones; not any more as each version of AI contains tools and objects that are not compatible or tools that do not exist in the other.

Make sure you always rename a Procedure when you make a new Procedure. Never use the default name 'Procedure'.

Hope this helps. Others on the forum probably have other 'suggestions.".