Edit (July 31): The testing website has been updated so that a Google Sheets Service Account is no longer required if you are reading from publicly available Google Sheets documents. Writing still requires a Service Account however. This version of the Google Sheets Component is preparing to enter the upcoming release of App Inventor with the next update, and so more than ever, your feedback with any unintentional behavior would be greatly appreciated. Thanks!

To begin using the Google Sheets Component, one must create a Google Sheets Service Account. A step-by-step guide can be found here:

Below is a tutorial called The PizzaParty App which had previously used the Fusion Tables component. This tutorial has been updated to use the new Google Sheets component instead.

Once you have gone through the tutorial above and understand how to set up the credentials, please explore some of the other blocks that were not covered by the tutorial above. A summary of the blocks can be seen below.

A Summary of the Blocks

And the GetRangeReference block shown below will yield the string “A1:C2”

Although these blocks are available to the developer, anywhere you use these blocks can be replaced with a text box provided the text is accepted A1 Notation (without the SheetName! prefix, as that is handled by each of the blocks in its implementation).

Most of these blocks will have a sheetName parameter, which is simply the name of the page that you wish to edit. By default, Google Sheets names these “Sheet1”, “Sheet2”, and so on. If you have a custom name for the page, be sure to change this whenever you load.

When reading from a Cell or Range, you can either use the helper functions above, or define the range yourself with your own text block. Below are examples of ReadCell and ReadRange using both a GetCellReference and a user defined text for the reference.

Finally, there is the ReadSheet block, which will simply return all the data in the spreadsheet with the provided sheetName.

Each read operation has its own event block that handles the return value.

As a quick note, the cellData is a text value, rowData and colData are both lists of text values, and rangeData and sheetData are 2D lists, or lists where each element in the list corresponds to a list of text, one for each row.

In addition to the Read operations, there are blocks for assigning data to a row, column, cell or range as well. These are the Write Blocks. They require similar inputs as the ReadBlock, but this time, they need the values to be assigned. The shape of the data to be assigned should be in the same format as the data that is returned in the GotData blocks shown just above. That is, cells need a single text value, rows and columns need a list of strings, and ranges need a list of lists of strings. Below are examples for how these are used.

982×382 47.3 KB
Similar to the Read block, each of the Write operations has a callback event, which is called whenever the write call has finished updating the Google Sheets document. This allows you to update any information on the app which depends on the datasheet being updated. 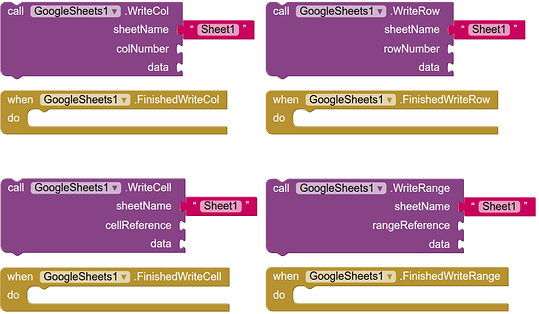 Add and Remove Rows and Columns 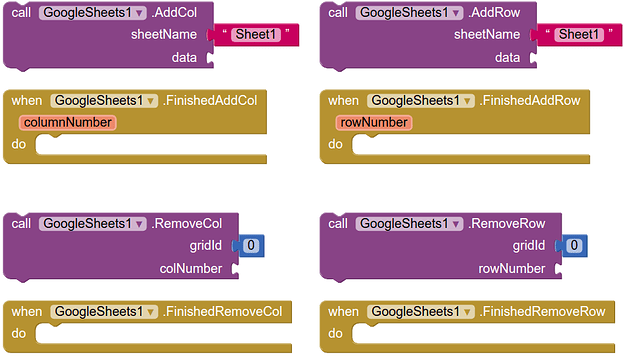 For example, to add a new Row, and remove the first row, you can call the following blocks.

For advanced users, the ReadWithQuery block may be particularly interesting. This block uses the Google Query Language, a language similar to SQL for those who are familiar with it. This block requires that the Google Sheets document is shared so that anyone with the link has the permission to at least view the data.

This means that you can request subsets of your data, such as all rows where the username matches ‘Johnothan1999’, or where the score is above 100. For example, let’s say that the Google Sheet has the following pieces of data.

The following block will retrieve the data in the second, third, and fourth columns (aka columns labelled B,C, and D) for the rows where the second column matches “John1999.”

The response will be a list of lists, similar to the result of the GetRange block. Each list in the response represents the column labels if one exists, and the rows which matched the criteria. In this example, the response contains two rows with the three requested columns, the first being the labels and the second row being [“John1999”, “John”, “10”].

More information on the Google Query Language syntax can be found here: https://developers.google.com/chart/interactive/docs/querylanguage?hl=en

Another block that was implemented was an ErrorOccured event block, which will catch any error from the Sheets component and store the stack trace as a string in the errorMessage value.

Thank you for your time. Any feedback is highly appreciated.

25 Likes
How to use the built in spreadsheets component
Build failed! ai2-buildserver-nightly-ewp.csail.mit.edu
WARNING: Google has Deprecated the Fusion Tables Service. It will stop working on December 3, 2019
Why we use Variables?
Connect with another service/app (simulate food order/delivery)
I want to make Google Sheet Extension
TextConverter : Convert text to different forms & back again!
Testers Wanted: Google Sheets component
I need Google Sheets Component Code
Build failed! ai2-buildserver-nightly-ewp.csail.mit.edu
Salman_Dev June 12, 2020, 4:20am #2

This is great news! I will test when I have time

However, notice that the RemoveRow and RemoveBlocks require the gridId instead of the sheetName. This is due to a requirement of the Google Sheets API.

Which means, the Remove methods need the gridId and Google does not provide a method to get the gridId from the sheetName? Is that understanding correct?

To be consistent with the Add, Read and Write methods would it probably be possible to use the gridId there, too? Like this a user could rename the sheet names in the spreadsheet and the app still would work…

In addition to all of the write blocks, there is also a single event block that gets triggered after ANY of these write blocks are finished being called.

One piece of feedback we would like to hear about is whether we should split this AfterWriting block into a 1-1 correspondence, or if that would be too overwhelming and the single event block is good enough.

The procedureName parameter is horribly named. I would not regret its loss. I went looking in the blue procedures leg of the builtin blocks palette for which procedure was connected to the writing to the Sheet, and came up empty. It took a while to guess that the value would be a member of the list (‘WriteCol’, ‘WriteRow’, ‘WriteCell’, ‘WriteRange’), namely the methodName.

By all means, drop the parameter and split the event into 4 (or more) events matching the possible triggering methods. The BLE extension does this well, with ReceivedStrings, ReceivedBytes, etc.

It is no small accomplishment to storm the gates of Google and come back with sheet access blocks.

But I want more loot.

Regarding the WriteComplete event block, could the InsertRow equivalent return the row number of the newly inserted row? That would help if I were to have inserted a formula like =(sum of column 2 where column 1 = ‘ABG’) and wanted to see the result.
Or is this hopeless, because I can’t insert formulae and expect them to act like formulae ?

Thank you for the feedback! I will be changing the event to match the possible triggering methods based on what I’ve heard so far.

Thank you for the comments Tim!

To answer the first question:

As for the second question:

From reading your instructions, the spreadsheet is still created and hosted on the developers google drive, yes? Any plans to allow users to connect to their own google drive and create their own spreadsheets? (I have been working on this…

At the moment, I’m prioritizing allowing the developer to create their own datastore to substitute for the functionality of Fusion Tables, with some additional functionality. More likely then not, we may not get around to creating a new Google Sheets document on the user’s Google account, although it’s not out of the question.

For now, the closest thing to creating and using a Google Sheets documnet on the user’s account would be to have the user create their own Sheets, make it public to read/write, and the app can use the user’s spreadsheetId as the source, relying on similar principles as the answer to the first question.

Which means, the Remove methods need the gridId and Google does not provide a method to get the gridId from the sheetName? Is that understanding correct?

To be consistent with the Add, Read and Write methods would it probably be possible to use the gridId there, too?

I agree that it is weird for the discrepency between some blocks using grid id and sheetName. I will continue to look into whether I can determine one given the other, but I remain at the mercy of the Google Sheets Java API. I’ve been referencing mainly the pages around here.

But I want more loot.

Regarding the WriteComplete event block, could the InsertRow equivalent return the row number of the newly inserted row? That would help if I were to have inserted a formula like =(sum of column 2 where column 1 = ‘ABG’) and wanted to see the result.

I can definitely add this feature. I plan on creating a 1-1 correspondence, along the lines of FinishedWriteCell and FinishedAddRow. For “FinishedAddRow” and “FinishedAddCol” I can provide the number of the newly added row/column.

Or is this hopeless, because I can’t insert formulae and expect them to act like formulae ?

You should be able to enter formulae and it will evaluate on the sheet appropriately. When using the API, one would normally have the option between reading/writing the raw value (e.g. formulae) or as a user-inputted value (e.g. reading the result of the formulae rather than the actual formulae themselves). I opted to force the latter.

Thanks again for the feedback and suggestions!

I downloaded http://sheets-dot-ai2-ewpatton-temp.uc.r.appspot.com/companions/Emulator.apk
and got 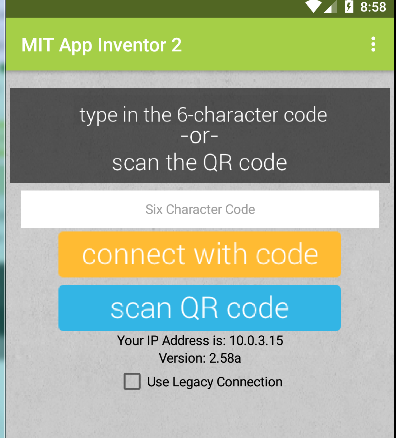 yet the help says 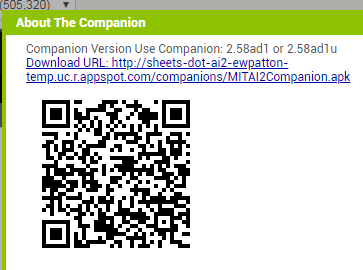 Should I be worried about the version difference?

Filters are definitely something I plan on adding to the Google Sheets component. Making sure that it is in a user friendly format will be the tricky part.

a few years ago I played around with the Google Visualisation API Query Language, which offers SQLish query possibilities, see also https://puravidaapps.com/spreadsheet.php#select

I would be great to have something like this…
I myself prefer to follow the KISS principle, Keep it simple, stupid… whih means from my point of view, don’t worry too much about a “user friendly format”, keep it simple, i.e. just provide a possibility to send a sql statement in text format as it is rather than complicating things…

Wow - the timing is perfect. Thank you.

Restricting the blocks to such a low level (row and column numbers only)
without any kind of server side index or search is too ToHuBoHu.

where to get Google Sheets Component?

it is in development and only available on a test server... (this is the Open Source Development category...), also that component could still change a lot until it will be released...

After hearing some feedback, some additions had been made to the Google Sheets component. 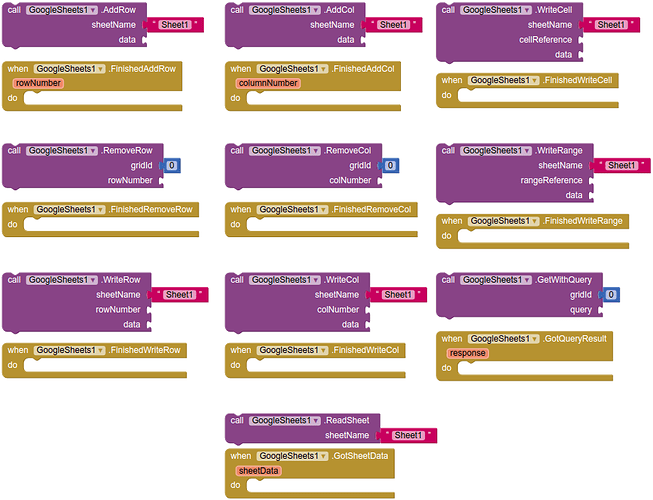 I look forward to hearing your thoughts!
Tommy H

looks great!
you also might want to add the gridId as default here...