Testing the next release of MIT App Inventor (nb187)

You might be getting a cached version of the dex file. For testing purposes, try removing the extension from your test project and adding it back. Here's the test project I created for testing. Does it work for you?

You might be getting a cached version of the dex file. For testing purposes, try removing the extension from your test project and adding it back

Yes, it helped. Thanks. I was already pulling my hair out and the solution was so simple

See the size of the imagepicker and button.

Even in the designer you can see the difference.
Normal server 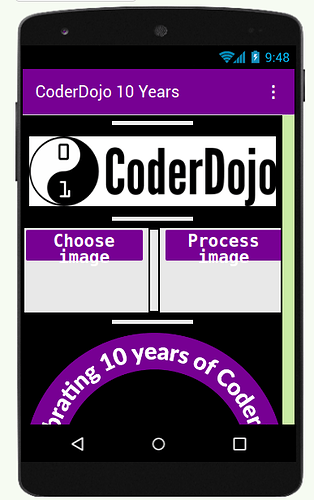 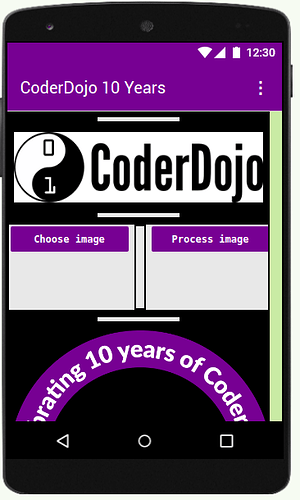 Furthermore i wonder if the permission system is still working.
On de normal server the permission to use WRITE_EXTERNAL_STORAGE is asked but not on the testserver. There it just displayes the notifier after starting the app.

But changing back to textbox didn't help.

Could someone also please test and see if the permissionssystem still works.

Edit @vknow360 showed me why i was wrong

Probably you are testing in Android 11 where that permission doesn't exist.

If i don't use the camera permission but just

The camera permission is asked but when i give permission i get the Error 908 message that WRITE_EXTERNAL_STORAGE is denied.

This happens also with the image picker.

If → DefaultFileScope is not set to → Legacy in the Designer

EDIT: If you set → DefaultFileScope to → Legacy in the Designer:

2 Likes
Test "copy file from assets to shared directory and read it from there" in ai-test
How do you check if a file exists?
Error 908:The permission WRITE_EXTERNAL_STORAGE has been denied- In a tag saving app
Anke August 5, 2021, 9:12am #125

If you set → DefaultFileScope to → Legacy in the Designer

Yes legacy is working in an apk for now? Wondering if turning it into an aab would make difference.

Wondering if turning it into an aab would make difference.

You have to upload the AAB to the Play Store (e.g. as an internal test track) and then download the general APK or use the Bundletool. But the AAB should work just like the APK.

I will try. Still don't understand what happened to the font size of imagepicker and button.

I've come up with a fix for the regression in the button text:

Hmm. I'll have to think about that. The logic in my head when I implemented this is that Legacy encompasses the older behavior, whereas any of the new scope types apply the scoped storage restrictions of Android 10+. In most cases, I think this is fine because App specific storage, private, etc. won't require read/write permissions (after Kit Kat Android no longer required READ/WRITE for app-specific storage, and before that you didn't need to ask for permission anyway--that was introduced in Android 6.0).

Nevertheless, it should always be possible to request READ permission on all Android versions and not only on devices with Android below KitKat (to get permissions for the ASD on those devices - below KitKat, API 19).

Because READ permission behaves the same on all Android versions.

What does that mean exactly?

I realize I'm a novice, but I'm thoroughly confused about the scoped storage changes, even after reading up about it. Are documents like .csv and .txt going to be able to be shared between app inventor apps after targeting sdk 30?

Testing the next release of MIT App Inventor (nb187) News/Announcements

I can confirm what @Boban was already whispering. As soon as there is any button, label, image, ... in a tableArr, there is a crash. An empty tableArr does not crash, not even with @Taifun's KeepScreenOn block. Tested on Android 11 and 9 with the same result. Recommendation: Avoid tableArrs and replace them with horizontal / vertical arrangements. (Btw, this general advice was also valid before the nb187 release.)

The copy and paste bug with the TableArrangement is a known issue in the older version as well. There was some work on a fix, but I don't know that it will make it into this version. Since we can do website updates as smaller release we may punt on getting it merged for this release. The AAB and SDK 30 support are a higher priority for us right now.

Since we can do website updates as smaller release we may punt on getting it merged for this release.

I believe that any corrections should be smaller and more often implemented. This would allow for better testing of patches by users while building projects. Not everyone wants to test on test servers, and not everything can be noticed when testing small projects. It would also prevent waiting a year for minor corrections ;). Especially since some of the fixes have been ready for a long time.

Nevertheless, it should always be possible to request READ permission on all Android versions and not only on devices with Android below KitKat (to get permissions for the ASD on those devices - below KitKat, API 19).

The guidance from Google (and Apple as well, for that matter), is that you shouldn't request more permissions than you need, and only request them as soon as you need them, and ideally your app should shut off behavior or fail gracefully when permission is denied.

What does that mean exactly?

Legacy scope attempts to provide the existing semantics for App Inventor where possible and therefore cannot assert a maxSdk (I guess it could for SDK 29+) since the app might read/write anywhere. So if you want to read/write arbitrary locations one MUST set DefaultFileScope to Legacy. In the manifest, you'll get the READ/WRITE permissions, and the manifest will not include the SDK constraint (again, subject to change w.r.t. SDK 29+).

By default, apps will use the App scope to be in compliance with the restrictions in newer versions of Android going forward. Existing apps that need the old behavior will need to switch to Legacy. I would encourage everyone to try and build new apps to comply with the more recent restrictions in Android as I expect Google won't ever role back these changes.

I set DefaultScope to Shared in the Designer (does it have any influence here?)

the companion app crashed (I used the latest version 2.60t6u), here is the logcat output 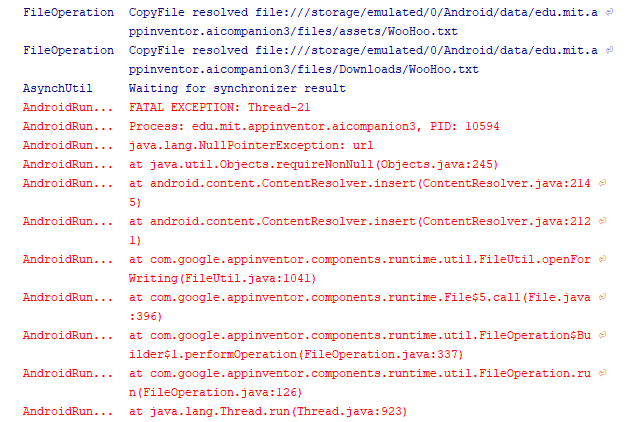 same happens in the apk file...

so the question is: how to correctly copy a file to a shared directory?