Hey there,
I've been working on a project to control the brightness of a LED strip using a TIP122 MOSFET. I've wired everything up and tested it out by uploading a test sketch, and indeed it works as expected. Now, I've added bluetooth functionality to it by firstly adding an HC-05 module, and then modifying the code. Then I proceeded to create an app to control it, with the logic in mind, and I created one successfully too. However, the slider that I added with a range of 0-255 doesn't simple SHOW UP! I have the rest of the components working fine, made sure that the slider is visible, but I won't see it on the phone screen after compiling, downloading and installing the .apk.

Try to change Theme to Classic from Screen1's properties, also set Slider's width from automatic to 90 percent or fill parent and see if it works for you

Is this with the Theme setting on Screen1 set to something other than Classic? If you’re using the emulator, you’re likely getting the Classic theme by default (since it’s an old Android version) and that would explain the visual difference you’re seeing between the emulator and your phone. 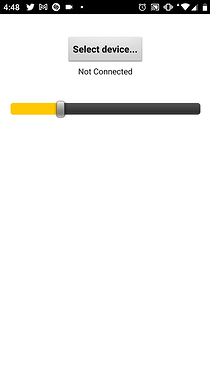 Thanks @dora_paz. However, your solution didn't entirely go well, other than the fact that I had to change the theme back to system default and finally increase the width of slider to fill its parent. That way, I saved and downloaded the .aia file from the project and re-imported it as an another project which FINALLY worked.