Sending text to microbit with uart

I'm trying to send values from app inventor app to microbit via this link App Inventor, Micro:bit and UART

But I can't get it work. The problem lies in this part of the code 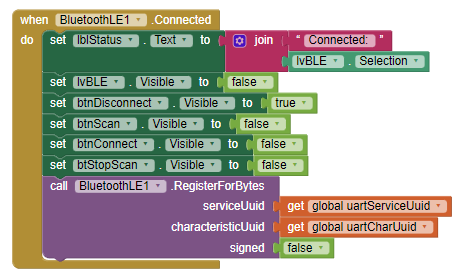 When I remove the RegisterForByte block the app won't crash in this part of the code. But when I then send text the UUid are of course missing and app will crash.

Why won't this RegisterForBytes block run?

Probably the problem is on your micro:bit. What do you have installed there?
Did you use the .aia from the tutorial or did you make modifications?

Here I have haded the .hex and .aia I'm using. And I'm using microbit V1.

Hi Svein-Tore
V1 smells like memory problem. Did you see an error code on your micro:bit?
I cannot try your set-up right now, but I was never very successful using V1 micro:bits because of memory problems.

It is also important to make sure your have the latest firmware and that you do not use a Microsoft or Chrome browser to load the .hex file on the micro:bit, because they install stuff that impairs the UART.
But if you can, get a V2!

I have searched a bit around, and It looks lkike you are spot on:

While the BBC micro:bit has hardware capable of allowing the device to work as a Bluetooth Low Energy (BLE) device, it only has 16k of RAM. The BLE stack alone takes up 12k RAM which means there’s not enough memory for MicroPython to support Bluetooth on a micro:bit V1.

The nRF52833 used by the micro:bit V2 has 128k of RAM, allowing Micropython to make use of the BLE stack. Currently the only implemented feature is BLE flashing, allowing a user to update the firmware on the micro:bit over Bluetooth.

M y problems have been problems connecting to the microbit, and sometimes the microbit starts blinking in a randomly way (guess it is a kind of error).

For that reason I have ordered a microbit V2.

Hi Ghica! Micro:bit V2 solved the problem! though I must sometimes pair the micro:bit once again, and sometimes get message the bluetooth service are missnig. But downloading the program to micro:bit again (WHITHOUT chrome) fix that problem.