Save Canvas to Dropbox

I’ve build an app that lets you take a picture and save it als a .jpg with a name based on data and a number.

I set the image as a backgroundimage of a canvas.
then save the canvas based on 2 textboxes and a .jpg plain text box

I would like to be able to save the cavas image straigt to a dropbox.
I’ve had a look arround and found a tuttorial https://puravidaapps.com/dropbox.php

but I dont want to use a list picker I want it to save the taken picture with a chosen name.

the app that I have build so far is attached.

but I dont want to use a list picker I want it to save the taken picture with a chosen name.

what about adjusting the example to your needs?

If you are asking for help, I recommend you to make it as easy for others to be able to help you …
You probably will get more feedback then…

To download the aia file, upload it to App Inventor, open it, do some bug hunting for you, etc… this takes time, and most people will not do that…
Thank you.

Thats a fair point feel free to delete the topic,
I’ll re formulate the question more clearly with some images at a later point.

The app that I’ve made asks the user to give the following input
A projectname
Pick a date
pick a point number.

Then take a picture and save the image to a newly created folder with the projectname using the mont/day and pointnumber as the name for the .jpg
so today would be 06021000 (pointnumber being 1000)

This works and is already a great help.
But I would like to create the projectname folder and save the image on my Dropbox account. 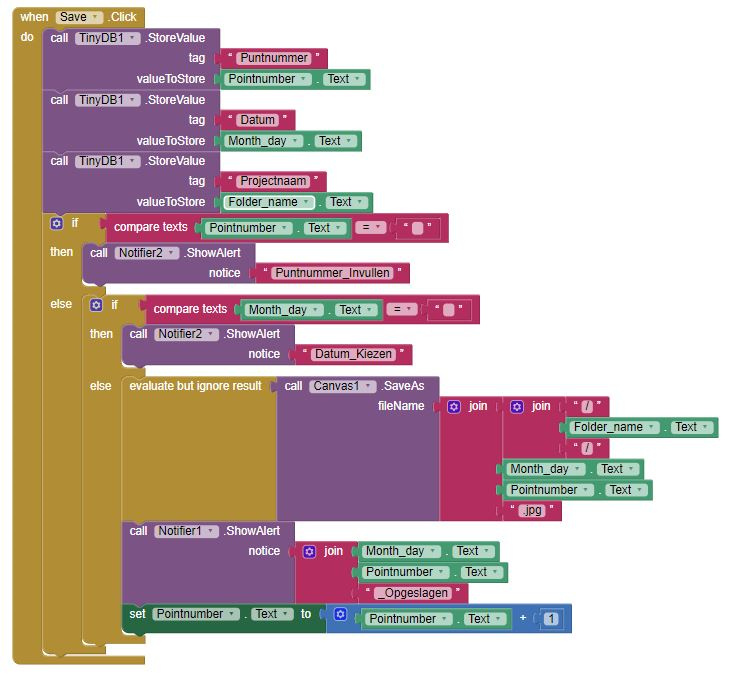 I use the tinydb so it reminds the user input afther closing the app and reopening.
then It checks if all fields have been filled in if not if gives a notification (text is in dutch)
Else; saves the canvas, creates the folder and saves the image.
last step is the notifier telling the user the image has been saved and adds 1 to the point number to prevent identical numbers. 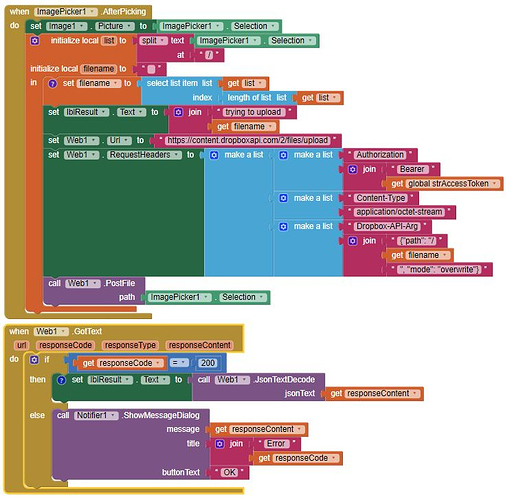 then as a test I added an upload button. 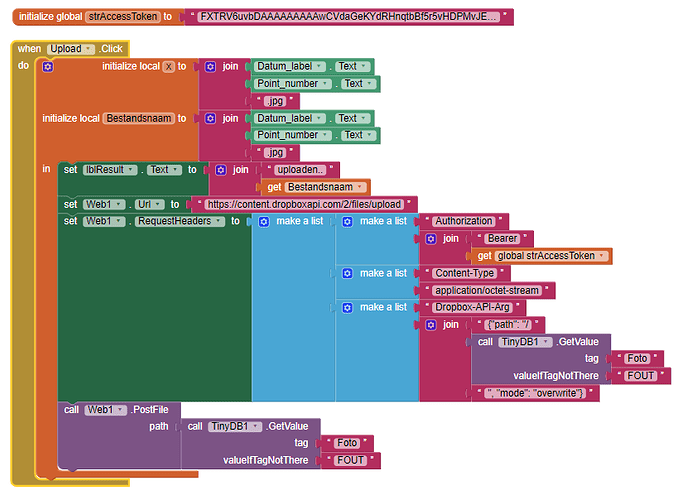 The example uses an image picker and a few list blocks that I dont understand.

When using the example it did work and save a selected image to the dropbox account.

The example uses an image picker and a few list blocks that I dont understand.

you might want to elaborate about which blocks you are talking…

ok, do you need help concerning the errors?
if yes you might want to reveal, which errors you get and when?