I'm created a simple player, with a play and stop button. I tested in my cell and start without problems, but if do stop, it not start again, showing the runtime error
I don't know where is the problem. The error appear in the app inventor viewer area and in the apk installed on my phone.

Any suggestion to solve the issue? 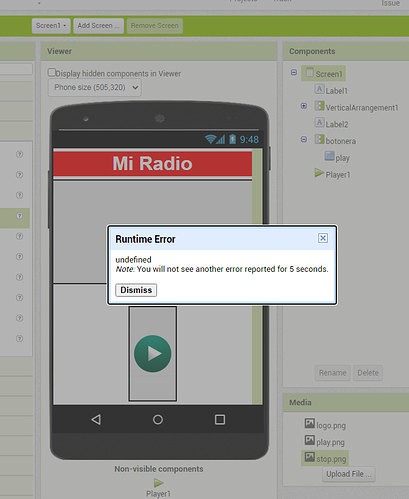 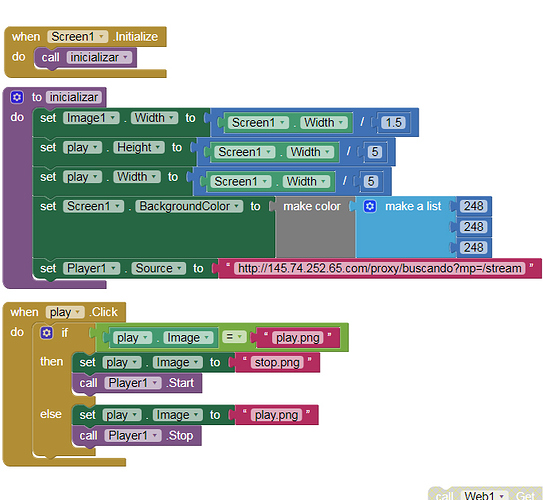 Is the video streaming? They way app inventor works, it will not work very well with streams. Can you show me just a glimpse of that video stream?

it is not video, it is audio streaming

Okay, then that might be the problem. Try to play a normal mp3 or mp4 locally. That might help.

However, I had a similar issue (no runtime error) with much the same blocks. The player would stop the sound, then five seconds later it would start up again.

You could try this see if it works for you ? If it does then you could create the two buttons to look the same (apart from the png file) and replace one button with another on Click. A clunky workaround I know.

You could also try using Taifun's Enhanced Player Extension to see if that makes any difference, but make sure you read the documentation about http urls and the enhanced features

Unfortunately I can't find the error, I'm really confused! I appeal to help! Thank you

Can somebody help me to know if Taifun's Enhanced Player Extension support to set audio source from URL' s of Shoutcast and Icecast servers for live streaming?

you can do that, but the TaifunPlayer extension is not the best tool to stream audio files...

you can find more suitable extensions for this purpose in the extensions directory https://puravidaapps.com/extensions.php