Dear all,
while continuing to experiment the power of MIT AI2, I have written a piece of code to connect my car's OBDII line using an ELM327 interface to a tablet via a BT link..
In the annexed aia you'll find the app, and in the assets sub-directory (open the aia with 7zip) a docx file that contains a few pages on the sw architecture (written in my low level english

).
It's not an elegant and refined app, but it works, so I hope that it could be of some help for someone who wants to play with CANBUS.
Enjoy !!!

PS. : last but not least ... many thanks to TAIFUN and KEN for their powerful extensions, as usual !!!

Thank you for this, I shall give it a try!

This is great stuff.
If you don't mind, I'll open up the contents for easier reading on the board ...

24th/June/2020
CANBUS DIAGNOSTIC PROTOCOL CONNECTION WITH ELM327 AND MIT AI2 APP
--- FOREWORD ---
This piece of code is not a complete APP. It’s just a way to show how to connect a car ECU (Electronic Control Unit) by means of a CAN interface (the diagnostic interface). It assumes a little knowledge on Bluetooth and CAN protocols (not really so much!). There are many App’s capable of a complete diagnose of a car status, but this code is just to verify if we are capable to do the same. Anyone can go further improving this code which is just an exercise. Hoping it can help someone.
--- HW REQUIRED ---
ELM327 CAN to Bluetooth interface: from 5$ on Amazon .
Any 8” display tablet (if you want to use my Screen1 layout, see below, otherwise you can re-arrange it according to your available device)
--- MAN IN THE MIDDLE ---
I have been able to discover the commands sequence used to wake up my car’s ECU and to put it diagnostic mode by putting a sniffer (a “man in the middle”) between an already done (free) app, available on the Playstore, and the ELM327 connected on the OBDII socket of my car.
In this way I have recorded and analyzed the commands, so to replicate them with my app.
The scheme is here below: 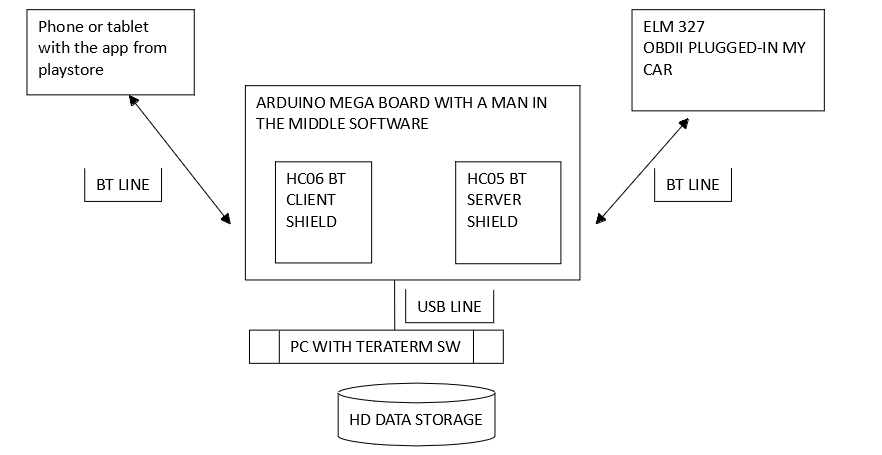 The Arduino SW (written by me) is simply a “sniffer”: any character received by the phone is sent both to the ELM327 and to the PC, where it is stored on the HD. Any character received by the ELM is sent both to the phone and to the PC where it is stored. In this way I have catched all the commands sent by the phone to the ELM 327 (to my car) and all the responses sent by my car to the phone. The Mega board is necessary because we need 3 serial lines (2 for the BT’s and one for the USB toward the PC)
Once stored the commands and their responses on the HD, in a file, I have had the possibility to read them. They are ASCII characters, so easily readable. You don’t need to do the same. I did it just to understand which could be the commands sequence between the app and the car. Once understood the commands and their responses I have written my app.

--- BT RECEIVING PHYLOSOPHY ---
Once activated the BT client, the app sends a request (via BT) to the ELM and waits for the answer. It waits until a complete response has been collected. Any response is terminated with a “>” character, so a -1 is set as a receiving buffer length and it waits until the “>” is received. To avoid to leave characters in the buffer, the receiving steps are repeated until no new characters are received, in the meanwhile (see Clock1). An empty message is also discarded. A CAN response is checked to be the one related to the command: in other words if the command was 01 05 the only accepted answer is 41 05 (any other answer id rejected until a true 4105 is received: no timeouts: “just a quick andirty software”) . 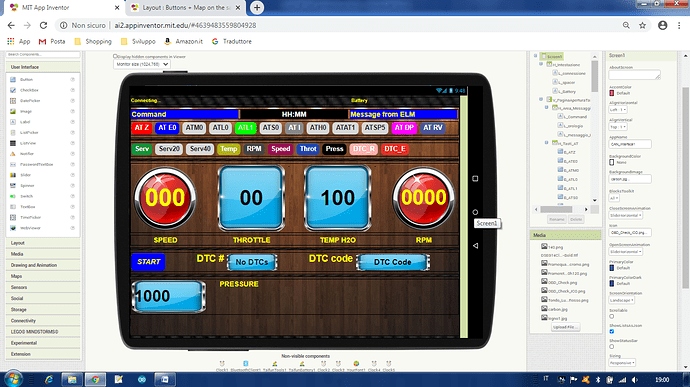 The coloured buttons send the respective command once (by hand ).
They are put in a sequence (from left to right) as they were sent by the ELM327 automatically.
The button START sends the complete sequence automatically in order to initialize the coomunication toward the car ECU
The CAN protocol currently selected is KWP @250 Kbps (#5 in ELM327 list) because that’s the one of my car. Most probably yours is another one, just check it with an automatic search of the ELM327.
The BT address is fixed (my ELM327 one): simply change it with the address of your ELM327 interface box.
Take care of the interframe time (some 250 ms typically). It can be suitably tailored with the transmission speed of your car (i.e a CAN @500 Kbps). Don’t be too much fast (too short interframe time) otherwise it does not work. Once found the best compromise between updating rate of the screen and the communication capability of your car you can, leave it.
A complete document on ELM327 use and commands is embedded here.

Thanks to KEN: Don’t care if the throttle, temperature and pressure digits seem to be left aligned, the alignment becomes correct once the app is running because the seven segment font that I use in “your font” extension (KEN’s extension) aligns the characters a bit on the right, so I need to offset them on the left in order to have them in the middle.
Thanks to TAIFUN: for his “keep screen on” extension.
ELM327DS.pdf (467.1 KB) 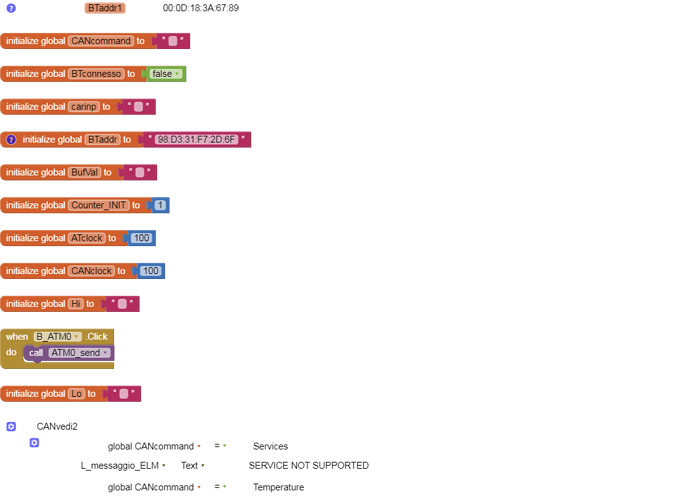 Individual interesting blocks, not all of them ... 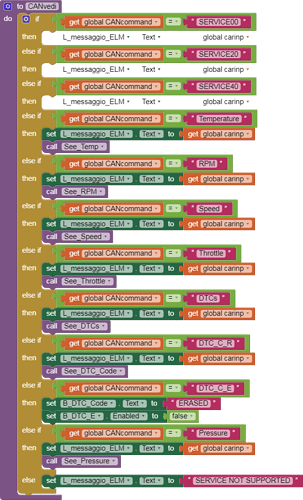 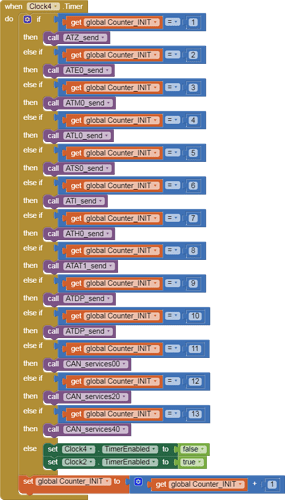 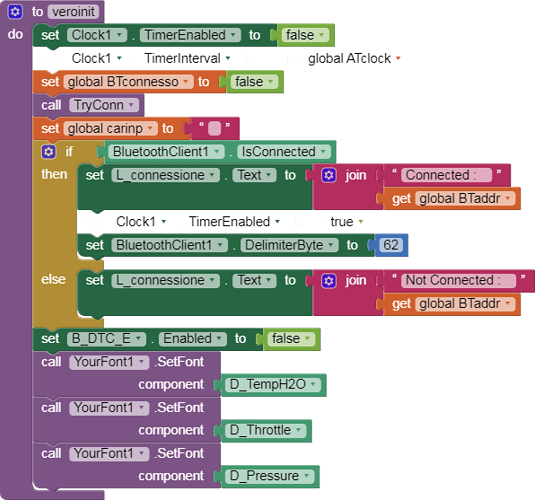 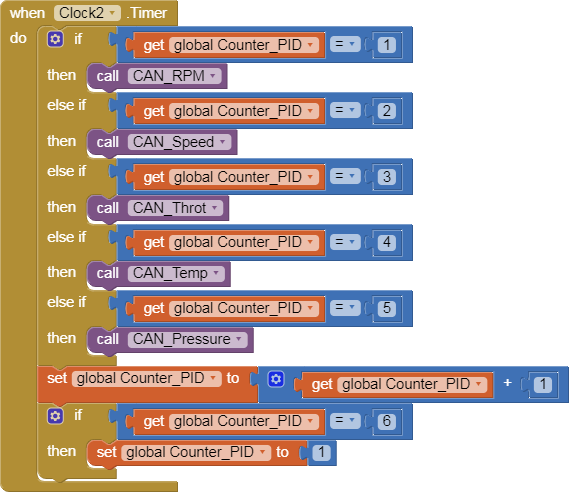 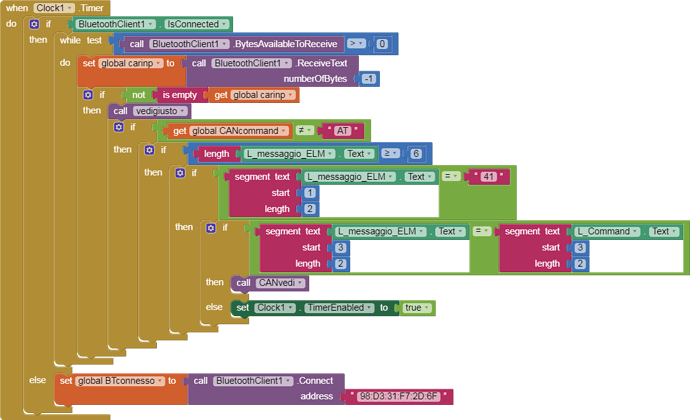 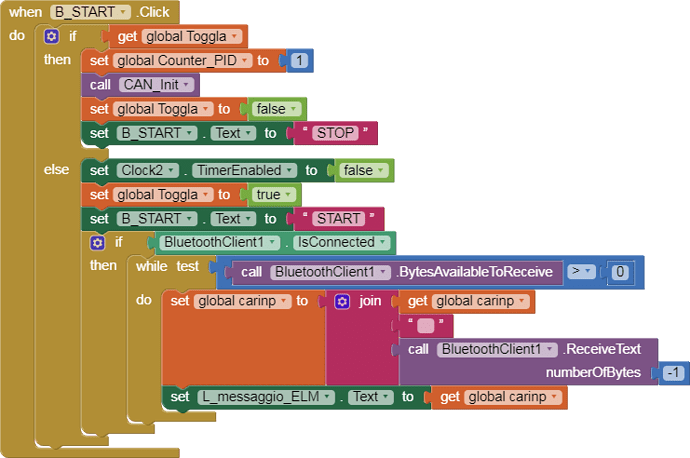 (Apologies for the upload crumbs and duplication. I had a lot of block images to upload and the board choked on them - ABG)

Dear all,
I'm really pleased of your interest in my code

Whether someone needs the Arduino code, just let me know, I will upload it.
It is really a trivial piece of software that mirrors the characters received from one of the three sources (BT#1; BT#2 and PC) between each other.
All the best..

PS in my blocks I use this convention:
B_xxxxx = Buttons
L_xxxxx = Labels
D_xxxxx = displays (sometimes I use buttons as displays because I can fill them with background images...)
H_xxxxx = Horizontal arrangements layout
V_xxxxx = Vertical arrangements layout
Labels without specific references are just Hor and Vert spacers to align other stuffs on the screen

BTW: TIMAI2, I believe that on your wonderful classic car there isn't a CANBUS

BTW: TIMAI2, I believe that on your wonderful classic car there isn't a CANBUS

Very true, best I can do with the MG is a small light bulb and two pieces of wire.
How times have changed

Yep!!!
but... what is not present cannot break itself

Whether someone needs the Arduino code, just let me know, I will upload it.

You might as well upload it now, so it will be in this thread with your other code.

Dear ABG, here it is !
Cheers

Dear all,
I really do apologise for this "bug", but I have left in the CAN_init block a "wrong" Clock4 timing (100ms instead of 1000ms) so please discard the previous value and use the new one, as per annexed .png.
Sorry .... 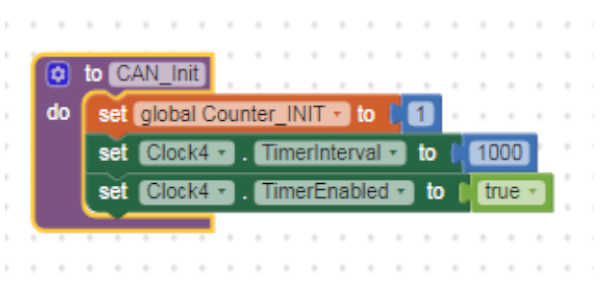