You have not changed the call function addUser to usun_w 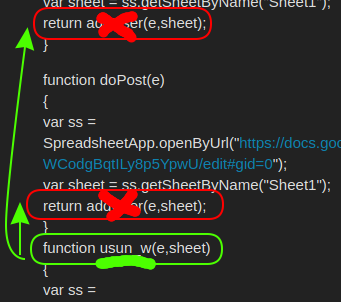 Also, you can have both the add and delete functions in the same script, by sending a variable, e.g

Have you deployed your changed script to a new version?

Of course, after each script change and new implementation, I change the link in the application in the button delete block.

You shouldn't have to...

I did what I was told but still does not work. I have no slighest idea what is wrong. I even make a new script with the content which seems to be good( You have checked it) and deploy it from the very beging. I have received the information that the new script was deployed and can be dangerous. I put the new link in my application but situation does not change.

This script is working for me

Other than that I do not know what else to suggest. You appear to have worked things up from the beginning.

Please to hear you finally sorted it out ....