HOW TO: Plot Sunrise/Sunset line on a Map and learn how to use equations 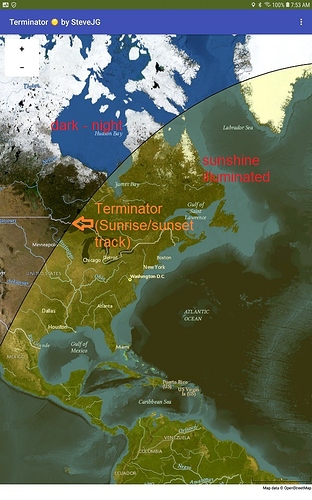 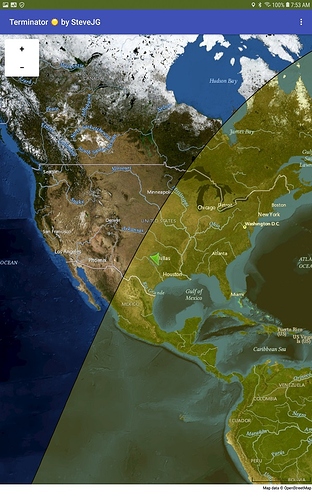 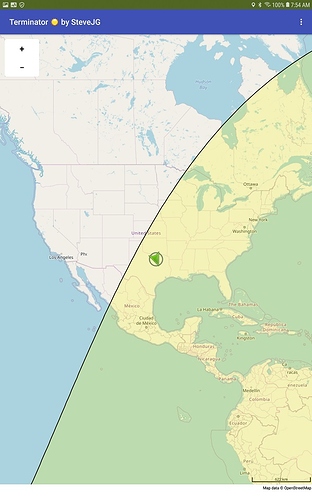 This is an advanced tutorial made to shows ways to work with the Math Blocks and Map component to calculate a complex path and display it on a Map. The tutorial explains how an app was made to display the sunrise/sunset line (often called the Terminator) in real time on OpenStreetMap tiles. That's all it does. The tutorial shows the code required to build an app called Terminator and explains how the code works.

The position of the Terminator path on the map is within about +/- 10 minutes of actual setting/rising time for a specific location. The Terminator position compares fairly well a time determined by more
precise sunrise/set determination methods. If you discover a more robust calculation method to display the sunrise/sunset track, please let me know. I'm not an astronomer and based this app on materials /astronomical equations suggested in the Internet. Improvements are welcome.

Background
Almost 20 years ago I wrote a Windows program to plot the Sun's Terminator path (the Sun follows on the surface of the Earth) on a map using Object Pascal (Delphi) that displayed on a landsat image
(Landsat imagery courtesy of **USGS/NASA Landsat?. Various versions of the Mercator like map image are available at https://visibleearth.nasa.gov/images/73776/august-blue-marble-next-generation-w-topography-and-bathymetry
. 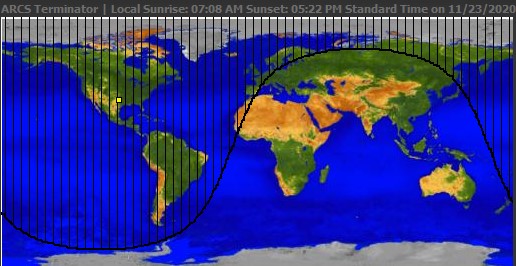 A developer recently asked in the Community how to plot the sunrise/sunset line with App Inventor. The Project conversion seemed simple enough. I dusted off the old Pascal code and started to port the code to AI2 using a Canvas.

It is possible to refactor the code to plot the sunrise/sunset line. I found it less complicated to return to the original astronomical equations and draw the Terminator on the Canvas or MIT Map component.
Re-coding, rather than 'convert' or refactor existing Pascal code, is less work and allowed easily coding the app to display on a dynamic map. I made App Inventor versions of Terminator that work with Canvas and Map. I only describe the Map component solution here. The Canvas version of Terminator is significantly more complex; World coordinates need to be converted to Canvas screen coordinates. The code demonstrating how to do the conversion on the Canvas needs cleaning up. I may post the code at a later date.

Building the Terminator app
The app is clever, calculating the position of the sunrise/sunset line using key information that exists in your Android device settings. The app uses simplified astronomical formula obtained from the Internet.

The Designer is simple. The app uses only a few native components (no extensions): 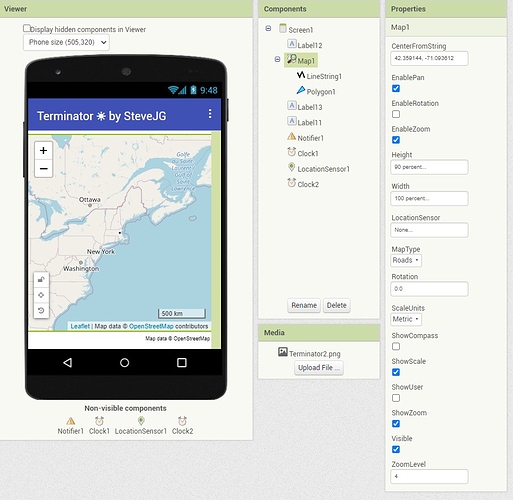 The upper Blocks use Inline Input (the default), the lower Blocks use External Input. Both perform the calculation cos(b) * sin(distanceDegrees). Converting the Blocks to Inline Input often makes the blocks easier to read. The option helps you compare your hand written equation you are attempting to convert with the blocks you create. Select Inline Input or External Input by left clicking on a Block that performs and operation, then select the Block display format you want to switch to. How to do this simple equation seems obvious; where these tools become valuable is when you daisy chain Blocks and have a significantly more complex equation to resolve into AI2 Math Blocks.

Help with the Math Blocks is the documentation http://ai2.appinventor.mit.edu/reference/blocks/math.html .

The LocationSensor provides your geocoordinates to display your location on the map and centers the map display at your location at a default zoom of 4. The initial map tile zoom is set in the Map component. You can use a Block in your Screen1.Initialize event handler. I use

to center the map on the USER'S location. MIT provides and recommends

Why? Using the PanTo block often glitches in this example, the CenterFromString code does not. Feel free to try the Pan Block, it might behave on your hardware.

The Blocks
All the code Blocks are shown at the end of this document. This is an advanced tutorial. A minimal explanation of the code and math required is provided.

How to display the path of the sun line

The day (February 2) is day number 33 in this example; the decimal part represents the current time.

You cam alternatively and independently calculate the day number the 'hard' way by using Blocks to determine the day of the year. The equations for the fractional year are
https://www.esrl.noaa.gov/gmd/grad/solcalc/solareqns.PDF (see the solareqens.PDF in the link ) which suggests the following":

Determine d (the day number) with either the built-in Android routines or your Block code version of those routines. Next use approximations (simplifications) of more complex equations (on which this example is based) to provide a reasonably accurate Terminator path.

The following are astronomical approximations derived from more complex equations posted at
https://www.aa.quae.nl/en/antwoorden/zonpositie.html#v526

Translate the Greek letter variables to something everyone can understand. Here is a key to the Greek letters in the equations: https://www.medcalc.org/manual/greek_alphabet.php

Convert the equations to App Inventor 2 Math Blocks.
The most difficult part of creating the app is understanding the math in the algorithm. The calculateSunDeclination Procedure calculates declination using the above equations. The global M is determined using information provided by the Android operating system. Alternative Blocks to calculate 'M' for devices with Android operating systems lower than 5 are provided (disabled Blocks in the code snipped below). If you have an Android 4.2.2 device, substitute the colored block code with the example alternative set global M code. Unfortunately using the alternative blocks results in lower precision in the calculation of M. You can regain that precision by creating code to account for the
present local hour. I do not show how to do this with Blocks.

Continue calculating. You are not yet finished. The above Procedure determines the sun's declination but you need to do more math to obtain additional parameters.

How do you know your calculations are providing the correct results? Check for accuracy 1) by inspection of the results; 2) by comparing the declination with a spreadsheet you can download at
NOAA_Solar_Calculations_day, then compare the sunrise and sunset times for your location using https://www.esrl.noaa.gov/gmd/grad/solcalc/ or calculate using the following equations
http://www.jgiesen.de/astro/suncalc/calculations.htm or view a Terminator display on-line https://in-the-sky.org/twilightmap.php and compare the display to the app's display.

Use the following astronomical equations from the link to calculate the latitude and longitude information required:

and convert the equations that use Greek letters to something easier to understand and convert to Block code. Write the formula out:

B is the latitude
L is the longitude

B and L respectively are the map coordinates calculated at any one time.

As one changes Psi from 0 to 360 degrees, these equations trace out the terminator position.

For distance from 0 to 360 calculate the above for changes in Psi.

Now try these Blocks. The for each number from iteration calculates the Terminator coordinates every 1/2 degree of Latitude starting at 0 incrementing each 0.5 degree. 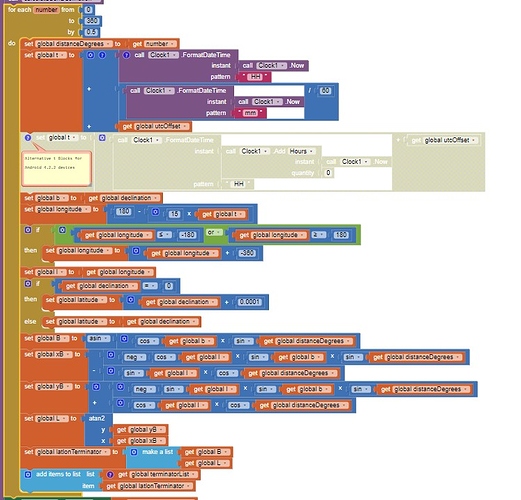 To display display a solid filled representation of the sunny versus night side of the earth, you need a Polygon on the Map. Show a display of illuminated versus non-illuminated Earth by setting Polygon1.Points to the terminatorList. Polygon1.FillColor provides a semi-transparent coloring of the portion of the map that is receiving sunshine.

You need these Blocks:

At map tile zooms less than about tile zoom 5, a colored map centered on your location coordinates (provided by the LocationSensor) displays. At lower zooms (showing larger areas), you probably get some unwanted map display chaos that might look like this: 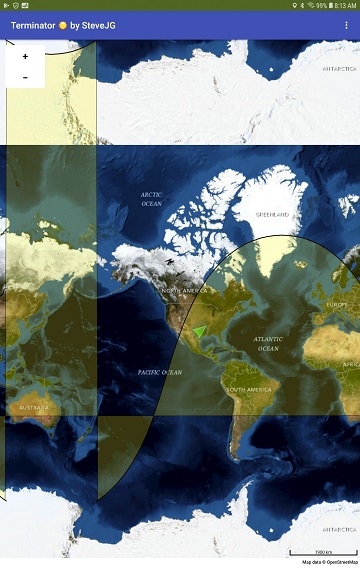 mapChaos360×576 80.9 KB
on your display. Obviously the instructions to the OSM server are confused. I suspect the map display chaos is a bug in the Map component or related to how Map displays the sinusoidal curve of the Terminator and issues with OpenStreetMap's api. I tried to ameliorate the chaos. I sorted the coordinate List, added points to close off the curve, etc. Nothing worked to eliminate the problem. I quit trying. 90 percent of the time, I get my desired results. The display problem is probably a bug in the Mapping components or in Leaflet (how OpenStreetMap ultimately displays map elements).

Will the Terminator calculation produce a correct graphic for you? This example works for a location in the northern hemisphere and west of the prime meridian. The example should also work for a location to the east (but untested). I suspect locations in the southern hemisphere may require adjustment. Appropriate negative signs somewhere in the equations might be needed outside the western northern hemisphere. Probably the algorithm to plot the Terminator is fine with the existing equations everywhere.

How to use the app

Install the apk on your device, then enable the app. The app uses your device's gps hardware. Be aware it takes up to a minute for the gps to become aware of where it is located. The map tiles come from the OSM server and may take a few seconds to display depending on that server's load and your WIFI or network connection speed.

Default map settings are set in code. Modify the code and interface to provide more flexibility in your version of Terminator.

To Do
A javascript version might execute faster and handle the equations better.
A math extension might simplify the code.

Note that the Terminator - Solar Calculator is intended for recreational use only. The Terminator app uses mathematical approximations. Terminator can only provide approximate sunrise and sunset data. 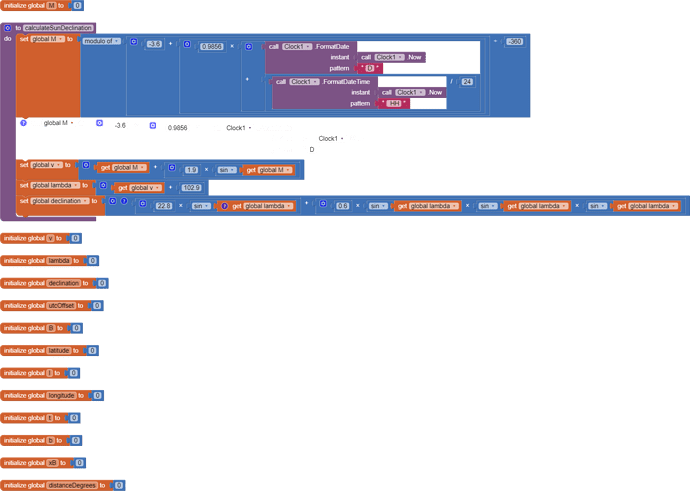 Thanks @SteveJG. This app makes me realize how lucky i was to pay attention in trig class... Thanks! It is so cool!

Thank you very much @SteveJG