How do you install MIT AI2 offline in Linux based OS?

How to build App Inventor from the MIT sources

This Doc is private

You should ask this question on a forum dedicated to your offline clone.

There isn't any MIT AI2 offline. There are third party apps that allow running a clone of App Inventor on Windows PCs. Not aware of any that will load on a Linux distribution.

A LINUX program called WINE is able to run some Windows apps on LINUX. You might install it on your Linux computer; follow the directions that comes with WINE and then cross your fingers. Google WINE Linux for a link.

Will that work; no idea. I have run many Windows apps that way on Ubuntu but never tried using one of the third party offline versions of App Inventor (and probably never will).

There isn't any MIT AI2 offline.

https://appinventor.mit.edu/explore/ai2/linux
check this link. I have downloaded and installed, but it doesn't open

That is for the Emulator/USB

http://appinventor.mit.edu/explore/ai2/setup-emulator.html http://appinventor.mit.edu/explore/ai2/linux https://www.youtube.com/watch?v=96U_hpc8p7w When watching a video, choose a high-resolution view, it will be much clearer. operating system: ubuntu 20.04 LTS Installation command: sudo apt-get install lib32z1 sudo apt-get install lib32stdc++6 sudo dpkg -i appinventor2-setup_2.3_all.deb What is the reason for the unsuccessful installation?

That link shows how to access MIT App Inventor using a Linux os. It does not describe how to use Linux with an offline distribution.

oh. finally it's only possible in Windows. Thanks for your support.
I had another question?
How to change package name, as Kodular and Niotron has built in option?

oh. finally it's only possible in Windows

No, it is eminently possible in Linux....

and please do not ask other unrelated questions, especially when you have created another topic for them...

let me know the steps, i downloaded the file and installed, but launching issue

Can we be clear as to what you want to do?

tried all from Installing App Inventor 2 Setup on GNU/Linux
but MIT ai2 is not launching.
Tried both the methods

Maybe this is what you are looking for

A Guide For building Appinventor In both Windows and Linux! Open Source Development

I noticed that many people were facing issues in building appinventor in windows First to make sure You dont have java version more than 8 You are not working in git bash Installations: Ant Google Cloud SDK Appinventor sources itself And Java 8 WIndows I dont think I need to explain how to download JAVA First we need to download Ant from Ant website it self https://apachemirror.wuchna.com//ant/binaries/apache-ant-1.10.10-bin.zip Next we need to install it with its wizard I dont think I …

What Linux are you using?

Show the output when you run AIStarter

If you just want an offline App Inventor just use

Works great on my Linux Mint.

Works great on my Linux Mint. 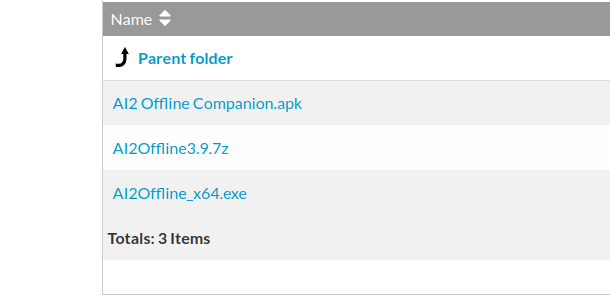 The 7z version. Then extract that.

The 7z version. Then extract that. 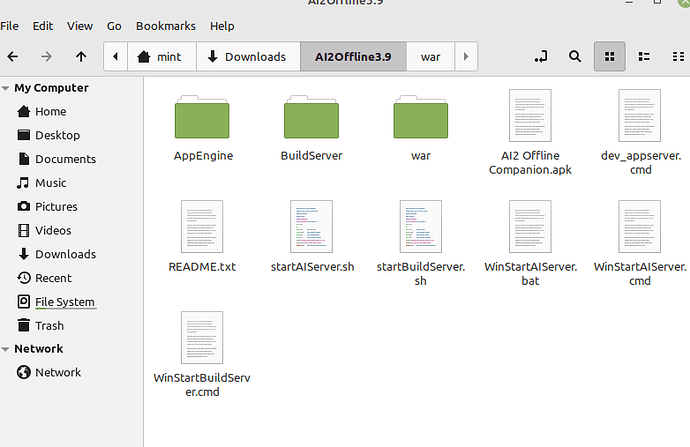 Tried all executions, but it never launches, waiting for your help

Check that the executables have their executable bit set: