He said he consulted with @Anke places the translation needed improving, so I'd like to hear from her in particular as to whether those issues were addressed.

I would really like to see the Maps component translated before releasing the update.

I really don't know (anymore) what it's about. But as for the translations, I don't know where to start. Some terms have been translated, others have not (see red dots & annotations). I don't think it's necessary (or helpful) to complete these translations. It should be reasonable for everyone to learn a few English terms to be able to use AI2. 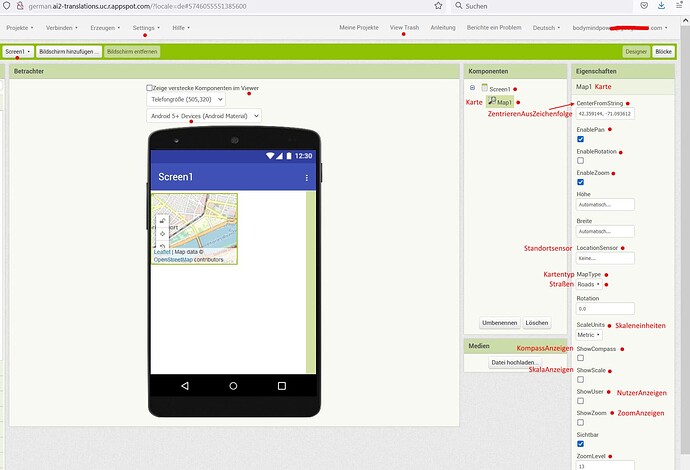 Hmmm. Those are a lot of missing terms. I personally think that Maps and Dictionaries should be translated before I make a new release.

I personally think that Maps and Dictionaries should be translated before I make a new release.

However, it is a lot of work to complete these translations. As I said, I think it is reasonable for every user to learn a few English terms! Even I, as a German native speaker, get along better with the English terms than if they were translated.

I forgot among others:
View trash = Papierkorb anzeigen

The documentation for OpenStreetMaps is in English. Since OSM is the api the Maps components use it is logical that the terms mirror or be congruent with OSM. So, why should the technical terms be translated at all?

Since OSM is the api the Maps components use it is logical that the terms mirror or be congruent with OSM.

This isn't strictly true. The Android version was designed so that we could switch to another mapping provider if we decided to, and on iOS we use Apple Maps as the mapping provider, not OSM. Much of the language is shared between different providers because a lot of it derives from earlier standards such as WGS84, which predates all of the web-based map providers.

MIT doesn't provide translations. Translations are created by volunteers who think it is worthwhile to have App Inventor translated into their native language. Often, it's a group of teachers or people running a coding camp who think it would be helpful for their young students to have the interface in both languages so they can learn the associations between the technical terms in their native tongue and the English equivalents.

Of course it is. You are describing vapor ware. At the moment, the ONLY Map component is OSM. Does it make a lot of sense to translate 'technical' terms from English to words that even native speakers disagree with and abandon terms that are used to develop the technology. To replace a term with what the technical community is familiar with a 'made up term' in Germany or any other language does not seem reasonable and in fact may create confusion as the tool tip is in competition with the Documentation.

If the documentation isn't translated by whoever why 'translate' the component Map 'technical' terms tool tips?

I believe Susan is creating unnecessary work for herself. Perhaps we should translate American English to English English and Canadian 'English'. Could eliminate a lot of characters (color / colour)

I believe Susan is creating unnecessary work for herself.

(Is this at least 10 character rule really necessary?)

Perhaps we should translate American English to English English and Canadian 'English'. Could eliminate a lot of characters (color / colour)

I was quite good at spelling in my younger days. Then my father got posted to the US, and I went to a US school(4th/5th grade). Got very annoying about being marked down for spelling plough (plow) and through (thru...)

At the moment, the ONLY Map component is OSM.

On the original question, I think this German update is not complete enough for release yet. If the original translator returns, or someone else would like to finish it, I'll be happy to release it.

With this reasoning, there would be no need for any language versions other than English for the AppInventor. The AppInventor is primarily intended as a didactic environment for programming beginners and is used in our lessons from the 6th grade. The English version is too complex for students in the second year of learning English or even with Latin as their first foreign language.