Hello friends, could you help me, how can I change the date according to the time zone? I don't want to change only the time but the date as well .... thanks to the people who help me

I see you asking the same question in multiple communities. Only ask in the community of the builder you are using.

Did you try something?
You can search for API...

And how about looking for yourself first, e.g. here:

OK. It would be nice if you could provide an example of what you want to happen. Please include the url of the json you access.

Here is a tool using the FormatDateTime block that probably would help. Not providing a link to the url and your Blocks preclude a specific application solution. 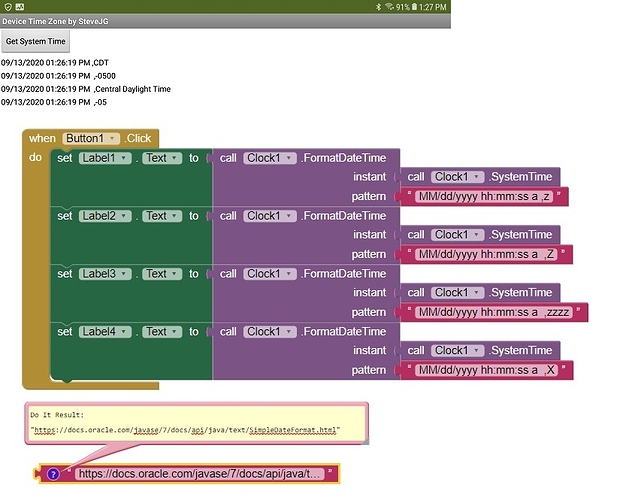 TimeZone829×665 116 KB
Use the above information along with a Clock component to convert the information in the time zone they are in using the UTC offset information. In the example instance you need to subtract 05 hours from the user's device's system time perhaps and write code to determine whether that process affects the data.

The Z, zzzz, X 'instructions you provide in the pattern determine what result you get regarding to the UTC zone information of a users' device. Provide a pattern like X to grab only the -05 in the example (time difference). Try it. Only you know what you want to do or expect to happen.

When you arrive at a solution, please post your solution. Thanks.

Trying the clock object, as I want to send a perfect number to excel to get the date in the actual timezone of the phone. And sending formatted text to excel it treats it as text, and it messes up the date, as it keeps on converting dates (i.e. in European format 01-02-2021, excel converts it to American, and it becomes 02-01-2021)

Doing this add just after midnight, the date I got in excel was from yesterday (I am in timezone +1)

During the next day at again just after 12 noon, tried this again and the lavel2.text gave me a value of xxxx.47571, while after noon should be higher then >0,5 as such confirmed this assumption.

As such started playing with formatdatetime to find a workaround, and the pattern X ( as suggested by SteveJG!). Pattern x gives me the numerical difference from UTC based on my phones timezone. And the tested result showed this perfectly to be indicated. +1.

Putting the X in action

So we convert the X value into mscec, and then add that to the clock return msec. Doing this it got me the actual days since 1-1-1900 to >0,5 so now showing the clock in my actual timezone.
Just to assure it actually works, changed the timezone of the phone to UTC-03. And as well this showed perfectly the UTC time minus in 10800000 msec which is -3 hours.

Anyway was looking for a solution to this, and this seems to work. Have been looking around and saw some posts but nothing that told me how to get clock in actual timezone, until I saw SteveJG suggestion on getting the timezone difference in value. Maybe there is an easier way to do this, and more then happy to get feedback from other people, but in case there is nothing at the moment that can deal with this, wanted to share to the forum in case it is useful for somebody.

Use this address in web component and when you text as JSON format , pull the date and time alone in separate label

that works as well,
anyway then my suggestion might help if people need it in offline mode or if the api that delivers the api is offline

Be interested to know if this is of any help ?

showtime.txt (216 Bytes)
(change txt to html and run as asset in webviewer: http://localhost/showtime.html)

Just a small update.. X if you are in GMT instead of being 0, it gives back Z. As such the calculation fail
You would need to put a test on it

If I use the Clock1.FormatDateTime function:

Any suggestions how to accomplish this?

Thanks in advance for your response(s).

MST is 7 hours behind of GMT

I think I have it worked out...screwy when you have to think in two time zones, but what do you think of this:

My last question is, and referring to Serge's answer above, if I'm using the Z pattern, what happens for a device which is located in GMT?

That what the blocks above your blocks handle.

I want it to be able to work correctly in ANY time zone.

This will all depend on whether your timestamp in your json will always be GMT. If it will be then You can adjust to any timezone. Make a list and select as required. If you cannot gurantee that your timestamp will be GMT, then you will need more data to help you set your required time zone.

I can ALWAYS guarantee that the timezone of the data is in UTC, because it's a Unix Timestamp.
The adjustment is for display purposes due to the user being in different time zones.
For example:

My intent is to ALWAYS display the actual timestamp of the data in UTC, no matter where the device is physically located on the globe.

I'm still not sure about using "Z" to obtain the time offset for countries like the UK(Located ON GMT), countries east of GMT, or what happens when I user is moving across the International Date Line. 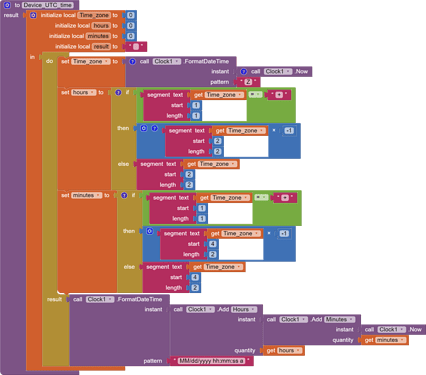 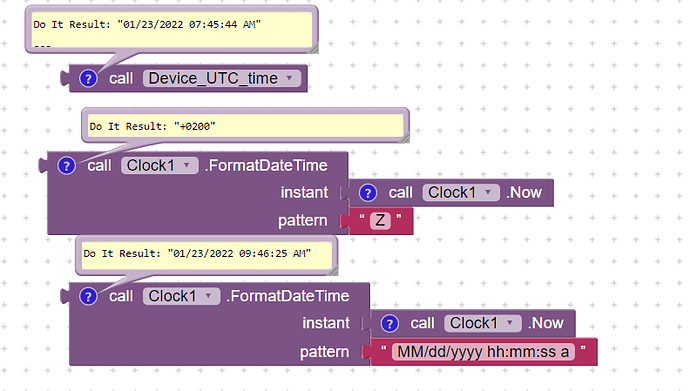