Could someone save me from this Runtime Error?

I'm making an app where I can view an image through a WebViewer and a html file in the assets. But I'm getting this Runtime Error.

Please help if possible.
Thank You for reading this far.

Extra Info : The collapsed blocks don't contain anything, i.e., they are blank.

Your error reports timetable all in lower case, in your html you show in sentence case Timetable

@TIMAI2 I used that sentence case itself. You may see my HTML Code.

Looking at the blocks, this does appear to be a very long winded method to achieve something fairly simple....

Looking at the blocks, this does appear to be a very long winded method to achieve something fairly simple....

Actually the thing isn't fairly simple. Also, it appears long because of the variables.

The next block is multipurpose. It will first convert the asd file into png (if not already a png file). It will also set the name of the file to TimeTable.png. It will also maintain the case if the file was originally named as Timetable.png.

The next block opens the WebViewer.

So every task is done in one procedure.

I've now removed the hard-coded package name and changed it to /files/.Timetable/Timetable.png. Waiting for the app to be installed in the background.

@TIMAI2 Could you tell me what to do with the WebViewString Property ? I know nothing about it.

The only thing I can guess is that its involves javascript, where I'm a newb. So could you give me the code ?

I beleive there is an issue with the convertor extension. It does not seem to want to traverse a directory with a . in it, i.e. edu.mit.appinventor.aicompanion3. This will be the case for most package names.

I also notice that WEBP is now deprecated, in favour of WEBP_LOSSY and WEBP_LOSSLESS (but this only appears to work on Android < 29).

A rework, using just the File component and an imagepicker (assumes the convertor extn was working!). Copies the html file to the Timetable directory, then no file path required to the image, just the filename. 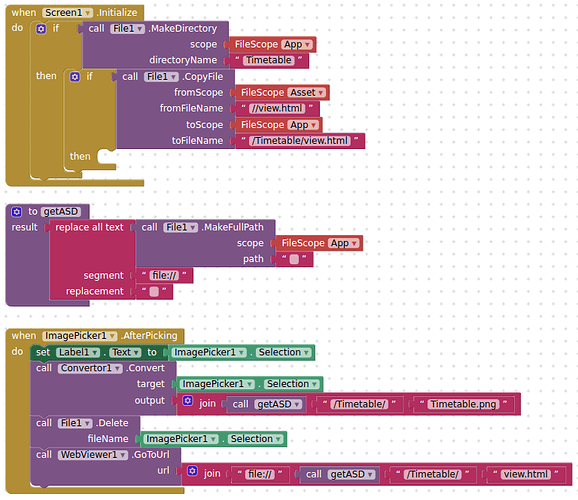 But I don't want to use the ImagePicker.

Btw, is the Convertor extension working for folders without a . in the beginning ?

Did you test this snippet ?

Edit : If the extension works, in that case, first I'll save the file in the ASD, and then I'll move the file to the /.Timetable directory.

Please run the snippet once.

I don't want to use the ImagePicker

Why not ? It is doing the same thing as GET_CONTENT, saves a copy of the image to the ASD for you, and in my blocks I delete the created file after conversion. What is not to like ?

In case the other apps with the FileScope Shared save the image in that directory, I don't want to delete those images.

The original file, as located by the opening of the gallery by the imagepicker is never touched. A copy is made to ~ASD/Pictures/_app_inventor_image_picker/, and my bocks work with and eventually delete that file.

Deletion is not strictly necessary, the image picker will only store up to 10 files, then start deleting the first one to make way for the next.

I never knew that ImagePicker will save it to ASD.

Thanks for the info.

Yes, i am sorry, i currently cannot edit the extension, here is the code (decoded):

I'm making the extension myself then. I won't be using other extension's source code for my first extension. Bye.

My extension carrier ended just as I was writing the class Constructor.
First I'd use this. Then I'll test the app. Then I'll make an extension myself.

@TIMAI2 What is the quality param ?

It is in the description/tooltip.