About opening other screen

You do not tell us what is on the screen that opens in the middle, or how the screen properties are set, or what blocks might be running in screen initialise. Provide this information along with an image of your relevant blocks and screenshots where necessary.

Before you ask a question / open a new topic please take care of the following points: The forum was previously searched for similar topics / issues. Give a precise (detailed) description of the issue / bug, the goal. Show the (relevant) blocks (images, screenshots of blocks in high quality). Debug your blocks (connect to Companion and right mouse click: → Do it). Name the Android version running on your (test) device. Do not open multiple threads on the same topic. Note: Make it as easy… 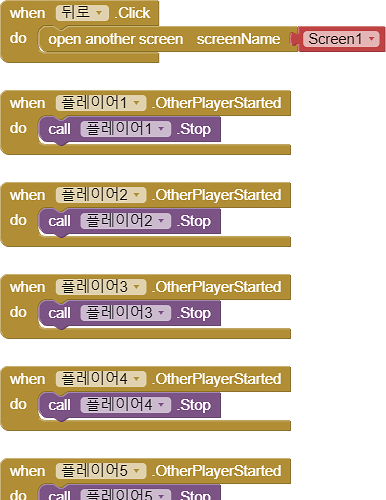 Sorry for lack of the information. these are my blocks and video which shows my problem. the first screen on the video is screen1 and when I click the button, AboutKalimba screen shows up. but as you can see on the video, I have to scroll up to go to the top of the screen. this is what I want to solve. Thank you for your help

Plus, Video I have uploaded is not working on the web properly. you can watch them by downloading.

Your blocks image "blocks(1) displays blocks on top of blocks, so we literally cannot see the whole picture. However, we can see that you are using at least 17 media player components - that is 16 more than necessary! It appears that you also have 17 buttons to run different media (sound or video) when either a single List View or Spinner Component would suffice and be more intuitive for the User.

Right at the top of the blocks(1) image we can see you have used 'open another screen' to open Screen1. However, Screen1 already exists and so your code will open another memory instance of Screen1 and leave the 'AboutKalimba' screen in memory. Instead, use a Close Screen block and the User will automatically be returned to Screen1.

We would probably need to see your Project (.aia) file to understand what the cause of the screen display issue is, but you have not made a screenshot of the 'AboutKalimba' screen Designer Properties palette for us to check the screen settings. Also, I'd expect an 'About' screen to tell me about the App and the developer of it - why are there 17 media items on that screen? Or have you just got the screen names mixed up in your description?

If you have this setting in the screen Properties palette: 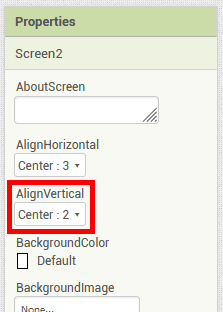 .....that might be the cause of the issue, but we can only guess.