I store diferent data, mostly even words, but when i get value from cloudDB sometimes it this number…
…all diferent case same number…

Do you get this just with numbers, or with words as well.

There is a similar issue on firebase

Show us your exported .aia file.

Also, do you load the CloudDB only in AI2, or
are you loading it any other way too?

Show us your exported .aia file.

Also, do you load the CloudDB only in AI2, or
are you loading it any other way too?

some other apps too

If you are using the same CloudDB for other apps too, how do you separate the different apps’ data from each other?

Or do they all agree on the data tags/values?

such as driver and dispatcher apps …

I notice in your blocks you use ‘#’ to allow you to store multiple sub-items in your values, splitting the values at ‘#’ to extract the sub-items.

Can you describe the data structures you are storing, for English speakers? 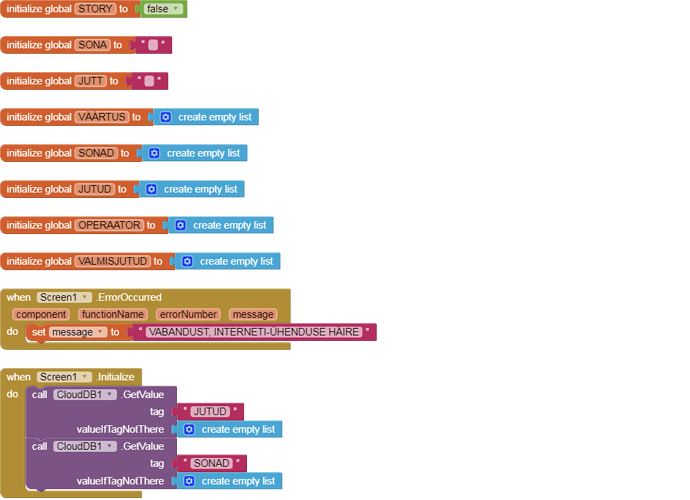 My english is very poor, i interact with help google translate…
…user can enter stories and can enter words…
…typing stories user must put symbol instead of an adjective that the app will later replace with a random adjective…
…symbol must be one that is not commonly used in text…
… there are two lists, one storing stories with a symbol instead of an adjective, which the app replaces with a random word from the list of adjectives …
… the story is also randomly selected …
…it is the funny game for little children…

would some other character (such as @ or &) not used in the text as a rule be safer?

the theme error repeatedly happened in a chat app too, which i made exactly like in tutorial (http://appinventor.mit.edu/explore/ai2/clouddb-chat) and where i did not use this symbol …
(The DataChanged function also does not work properly, there is often no response to changes in the data)

Instead of inventing your own markup, consider using JSON, a well known standard.

There is a Mad Libs implementation for Alexa at https://github.com/deniswells59/alexa-mad-libs

Though it’s in JavaScript for a different platform, maybe you can get some ideas there.

Regarding the interpretation problem, there is a special character ‘\’ that can be used in various contexts to disarm the next following character so it doesn’t get interpreted as special. (I had to insert two of them in this message to make the one character appear) Maybe try inserting them before special characters like ‘#’, ‘"’, etc, to see if that helps. (like TimAI2 suggested earlier in this thread.)