There are not enough simple examples of the use of blocks

Hello.
I'm trying to figure out the possibility and appropriateness of using certain blocks for programming. Unfortunately, the applicability of some blocks is not obvious. If it is quite simple with mathematical and logical blocks, then, for example, control blocks, time blocks, sensors and interface elements have many use cases. Hints that pop up when hovering over blocks are poorly help. Is it possible to find the simplest examples of using each of them?

Have you looked in FAQ Section: Books, Tips, Tutorials for AI2
especially the free online book?

There is also a special section in this board with app samples.

Thanks for the reply. I will clarify my question. For example, there are blocks that call an object property, and blocks that call the object itself. For example, among sensor blocks or text. What do the blocks transmit without specifying the object's property?
There are no examples of the operation of blocks of important objects, such as clocks, and the variety of such blocks is very large. Some of them are used in sample applications. It would be useful to have an application demonstrating the operation of each of the available functions, for example, using virtual screens mapped to each function being studied.
The initial data and the result are compared on a virtual screen for each tested function. In the block editor itself, I did not find a visual display of the result of the functions when receiving test input data. 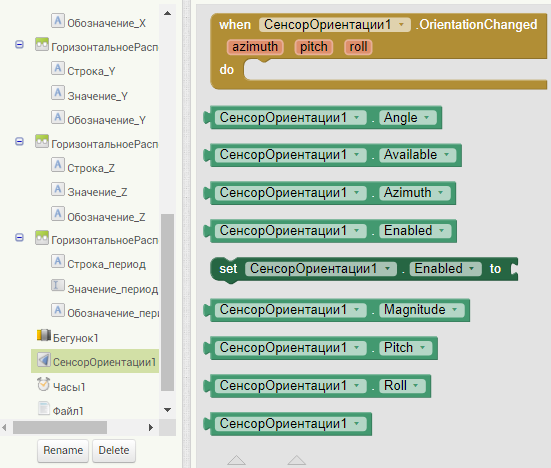 If you want a pairwise comparison of every block in App Inventor, that's not really feasible as the combinatorics is quite large (I think it would be on the order of hundreds of thousands, if not millions).

That said, we have gotten a few requests recently for more examples in the documentation, so that is something we are trying to get on our roadmap.

I imagine a test application like this - one virtual screen corresponds to the description of one block, where the input data is shown, which you can change, and the output data. The number of virtual screens will not exceed the number of blocks. There is no need for a pairwise comparison. In the application, the main screen shows a menu from the list of block categories and a list of the blocks themselves in the category. By clicking on the block icon, a screen with a description of the operation of the block and an example becomes visible.

There are no examples of the operation of blocks of important objects, such as clocks, and the variety of such blocks is very large

[Guide] How to use the CLOCK Tutorials and Guides

Hello everyone, I have made a basic guide on how to use the clock component. Here, I will explain all the blocks associated to the clock component and a few sample projects which use the clock. 1.DESIGNER PROPERTIRES OF THE CLOCK 1.1Timer Always Fires This is a Boolean property, i.e it accepts only true or false. If you wish the clock to run even if the application is not the active screen, i.e the user is using some other application. Can this be set using blocks? Yes! By default: Tru…

Thank you Taifun, this is very important information, I would like more of this!

Try the tutorials at Tutorials and Guides - MIT App Inventor Community contributed by users like you.

and the some resources to help you learn to use the AI2 tools. A very good way to learn App Inventor is to read the free Inventor's Manual here in the AI2 free online eBook App Inventor 2 Book: Create Your Own Android Apps ... the links are at the bottom of the Web page. The book 'teaches' users how to program with AI2 blocks.

There is a free programming course here Course In A Box and the aia files for the projects in the book are here: App Inventor 2 Book: Create Your Own Android Apps

How to do a lot of basic things with App Inventor are described here: How do you...? .

Learn about components Component Reference
and visit the Library The MIT App Inventor Library: Documentation & Support Help>Library on the MENU

These are only a few of the resources available to App Inventor developers.
You can also use the magnifying glass (at the top right corner of this screen) to search for discussions in the community about specific topics.

If no one has mentioned them yet, there are also